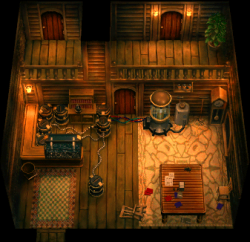 Lucca's house is built on an island south of Truce, and near an underwater river and its opening at the Vortex Pt. An amalgam of wires, machinery, and parts, it is a relative mess of inventions. This dangerous setting cost Lucca's mother, Lara, the use of her legs in 990 A.D. (though this was corrected by Lucca ten years later). Other than serving as a laboratory for Taban's creations for his daughter throughout the quest to defeat Lavos, Lucca's house has little involvement in Chrono Trigger.


After her journey ended in Chrono Trigger, Lucca continued to research science, developing incomplete Time Eggs and undertaking other inquiries into the field of physics. She started an orphanage after she found Kid and presumably after her parents died; her house grew to be full of little kids whom she deeply cared for. They did arts and crafts (even drawing the original Chrono Trigger team), and referred to Lucca as aunt or sis. Lucca enjoyed her work, though she sometimes had to stem her childrens' curiosity in her scientific projects. Around 1015 A.D., Lynx attacked the house in order to abduct Lucca and force her to unlock the Prometheus Circuit. Though this ended in failure for Lynx, he managed to burn the orphanage and house to the ground, killing Gato and some children inside. Much later, in 1020 A.D., when Kid fell into a coma due to her memories of the incident; Serge traveled back in time with the help of Masa & Mune to alleviate her thoughts. He saved children that would have otherwise died, and caught a glimpse of Lynx as he surveyed the destruction.

The console that almost severed her mother's legs was still in operation at the time; using the input L1 Triangle R1 Triangle released the HotShot machine intended for use by Kid.

Lucca's house is probably not the orphanage spoken of in Radical Dreamers, as her orphanage was stated to be within the realm of Regionna.

The drawings on the wall:

A drawing to the left and a certain blue drawing can't be seen up-close. They resemble Frog's fallen animation and a Nu: