A cat appears in several eras, usually in comedic situations. In the Tyrano Lair, it triggers a switch to a trap door; in Ozzie's Fort, it triggers a trap door beneath Ozzie; and in 2300 A.D., activating it alerts a Nereid to fight. Crono's house is the residence of a cat, but if Crono wins a second cat at the Millennial Fair, they will mate and several more cats will appear provided there is enough food in his room.

On the S.S. Zelbess, several cats come to Serge's aid by helping him navigate the ship after he's turned into a feline. They also jab at the humans and make other humorous observations from a feline perspective. 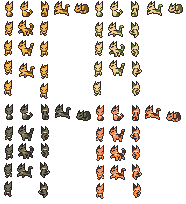