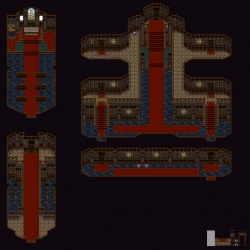 The Cathedral near Guardia Castle was the staging point of a plot against the monarchy in the Mystic War. Its builders constructed many corridors and rooms of study beyond the simple sanctuary in the front, but these were hidden away before 600 A.D. and could only be accessed by playing the sanctuary organ. As revealed in one of the endings, the Kingdom held royal marriages in the chapel, and castle attendants and townsfolk were free to visit the shrine at will. Around or before 600 A.D., Yakra infiltrated the castle and posed as the Chancellor; he invited his cronies to the Cathedral, where they would abduct soldiers and other people for consumption. They also erected a statue of Magus used for worship. It is unknown how long the deception went on before Yakra abducted Queen Leene. After Crono, Lucca, and Frog found the real Chancellor and Leene, the Cathedral was used for a short while by a single Nun before falling into disrepair. By 1000 A.D., it had totally disappeared from the landscape.

During the alpha phase of development shown in the V-Jump preview video, the Cathedral was still around in 1000 A.D.