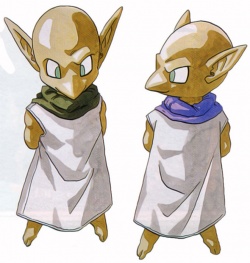 Masa and Mune are the mischievous twins that compose the spiritual side of the sword Masamune, forged by Melchior. Mune wishes to be the wind, while Masa is slightly more mature. While their exact nature is unknown, they are said to be Melchior's dreams residual in the sword. They have the ability to teleport at will, and, when inside the Masamune, can make it levitate and move on its own. They have one other sibling named Doreen whose origin is also obscured in Zealian history. They can be observed hanging around Zeal Palace in their spare time, and when the Ocean Palace was completed, they attended its christening (and sensed that Lavos would soon awaken). After the Ocean Palace Incident took place, Masa and Mune somehow came to reside in the Denadoro Mts, where they played and remained for generations while the actual sword stood firmly embedded at the summit. Soon, they became a legend, and many men seeking glory and fame attempted to defeat them for the right to wield the sword; all were turned away, until 590 A.D., when Cyrus displayed a spirit of true heroism and courage in battle with them.

He briefly was able to wield the sword before it was broken in two by Magus. Frog took one piece to his abode in the Cursed Woods, while Masa and Mune took the other back to the Denadoro Mts and continued to reside there. In 600 A.D., when Crono ascended the mountain and confronted them in order to secure the sword to defeat Magus, they scoffed at him but were eventually defeated (the battle marked the first use of the song Boss Battle 2, rendering it particularly memorable). They traveled at Frog's hilt for the remainder of Crono's quest, and in the Northern Ruins, were inspired by Cyrus's exchange with Frog to enrich the strength of the Masamune. Presumably, after Lavos was defeated, they remained in Frog's possession.

Chrono Cross expands the legend of the Masamune by opening a much darker chapter in its history. Stolen in the Fall of Guardia and presumably used to kill many, the Masamune became evil somehow, and was responsible not only for the death of Garai, but his son Dario as well (indirectly). When Home World's Dario was defeated, Masa and Mune were apparently awakened and spoke, leading to believe that they apparently allowed the Masamune to be used for such bloodshed and evil ends for the last fifteen years because they had simply fallen asleep and were unaware of the dark deeds being carried on outside. When questioned by Doreen, they remarked that they did not remember a thing about what had happened; Doreen promptly notified them that she'd be joining them in occupying the form of the Masamune. This resulted in the formation of the Mastermune.

Later, when Kid became trapped in her memories of Lucca's abduction, Masa instantly recognized Kid as Schala (at least, in appearance), and offered to help her by sending Serge back to the orphanage fire by using an incomplete Time Egg in Kid's pendant. Though they were unable to keep both Serge and his companions in 1015 A.D., they nonetheless allowed Serge enough time to free Kid from the past. Afterwards, they resumed their occupancy of the Mastermune, and were not heard from again. Their fate is thus unknown, and depends whether the actions of Chrono Cross were preserved in the Ideal Timeline.

A fable exists in which a swordsmith, Masamune, had to face off against another expert swordsmith. After completing their work, the two thrust their swords into a river. Passing leaves were cut in two by the opposition, while Masamune's sword actually made the leaves float away due to its spiritual power. This is exemplary of the notion of 'fighting without fighting,' seen in Sun Tzu's Art of War and typified in Bruce Lee's film Enter the Dragon.