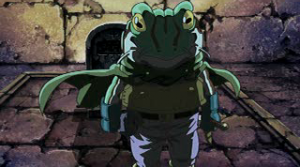 The Northern Ruins are a dilapidated compound located north of Choras lit by blue flames and haunted by ghosts and other terrors. At one time possibly serving as a ruling seat over the city nearby, it was apparently abandoned before 600 A.D. and resigned to the elements and erosion. Three chests of Zeal were stored in the ruins; its purpose otherwise is unknown. In 590 A.D., after Cyrus was slain by Magus atop the Denadoro Mts, Frog carried the body of the knight to the Nothern Ruins and interred him in a grave there, leaving an embittered epitaph. Cyrus's spirit could not rest, and soon joined those plaguing the rest of the structure. Ten years later, while questing with Crono to stop Lavos, Frog encountered Cyrus's ghost, but the dead knight was unresponsive to his pleas. Crono's team then enlisted the aid of the Carpenter of Choras to repair the structure, and assisted the carpenter by ridding the ruins of monsters.

While this allowed access to the sealed treasure of Zeal, it more importantly let Frog visit the grave of Cyrus, where he kneeled before the grave and addressed his friend. Cyrus soon appeared, and consoled Frog about the tumultuous events of the past. He declared that he had good faith in Frog's abilities and dedication, and lastly admonished the amphibian knight to protect Queen Leene. Masa & Mune were inspired by the event and told Frog that a hero's strength came from will; this empowered the Masamune, and subsequently the Northern Ruins were cleansed negative energy surrounding the place. Choras renamed the compound the Hero's Grave and took pride in the burial of Cyrus there. The engraving on the headstone also changed for the better.

Besides its proximity and similarity in architecture to Guardia Castle, the Northern Ruins are also thought to be the old castle for rulers of Choras because a throne existed there in planning stages of Chrono Trigger. See Northern Ruins (CTP) for the map with the throne intact.

A couple transparency graphical errors are visible in Chrono Trigger DS. To see one, go to the room containing the grave. Look to the top right and go in between the two ledges; you should see something on the topmost right side of the screen.