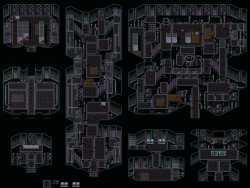 The Arris Dome is a dome with several inhabitants in 2300 A.D., and presumably the last appearance of the Kingdom of Guardia and Marle's family line. Doan, an elderly descendant of Marle, presides over the setting. Before the time of Chrono Trigger, one man attempted to access food stores deep within the Dome, but failed and died. He was carrying a "Seed of Life" later picked up by the party. The people of the Arris Dome grew the seed, and the resulting plant was a beacon of hope for them. The true significance of the building is that it contained a visual record of the Day of Lavos, which, when viewed by the party, prompted their plan to defeat Lavos and save the planet from certain destruction in 1999 A.D.

One of the tenants runs a market.

The most common problem encountered in emulating Chrono Trigger occurs here, as some keyboards are unable to do the L+R+A combo to open the door that leads to the Day of Lavos room. Simply try binding all SNES buttons to one key.

In the article Salt for the Dead Sea, it is theorized that one of the buildings in the Dead Sea is the Arris Dome, as it contains Lithosphere Investigation Report #27, which is similar to the Day of Lavos recording. Arris Dome is also mentioned in the subway section of the Tower of Geddon.

The word Arris is defined as the sharp edge produced by two surfaces meeting at an angle.