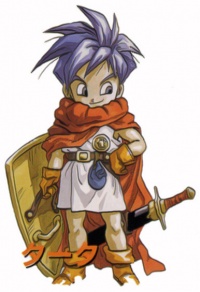 Tata is an unfortunate youth who happened to stumble across the Hero's Medal when it was left by Frog in a Porre cafe after he thought he had failed to protect Queen Leene. After briefly wearing it, some recognized it on him and immediately hailed him as a hero come to end to the Mystic War and uphold the honor of the Kingdom of Guardia. He was immediately spirited away to see King Guardia XXI, who was recently wounded in a battle, and the king gave him his blessing. Tata, still going with the act, was charged to recover the Masamune from the Denadoro Mts; he only got so far before a Goblin chased him away, as observed by Crono and his party. Comically running from the baddie, he warned the party that the mountains were extremely dangerous. Later, he admitted that his being the hero was a sham, and returned the medal to its rightful owner. However, this engendered the ire of his father, who wanted to claim fame and glory of his own.

Tata is a way of saying goodbye.