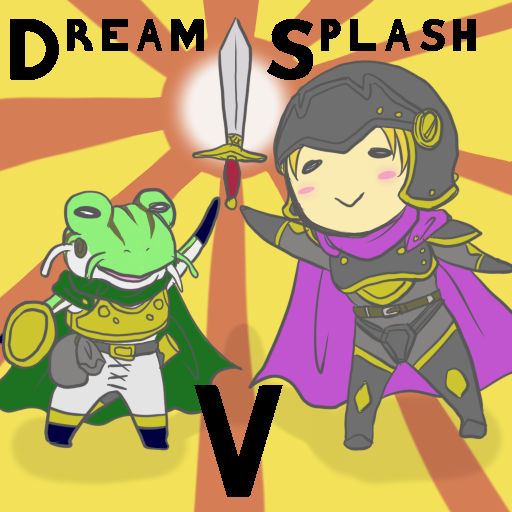 Welcome to the Chrono Compendium Dream Splash! The Splash is an explosive creative event surrounding a common topic running from June through November each year. The type of creative expression is irrelevant; one can write short fan fiction, draw fan art, make maps, create comics, write remixes, or anything one feels like doing!

The objective is to gather many creative works around a central theme and then exhibit them once the submission period ends. Dream Splash IV's topic is 600 A.D.!

Please submit any work in this forum. You are encouraged to use the attachment system; if your file is too large, don't hesitate to send it to our e-mail. If you'd like to show support on the forums, you can add this button to your forum signature here or elsewhere (in that case, linked!):

Thanks to Licawolf for these amazing banners. Kaiko made the Zeal art below, which Boo converted to a sweet banner of its own:

Now, on to the works!

2010's subject was Chrono Break, or your vision of a continuation of the Chrono series! Artists were encouraged to submit the following:

We had a slew of entries this time; let's get started!

Faust kicked things off with a scream from the underground with his Chrono Break Scriptment, a personal project begun before he came to the Compendium. While it fell by the wayside as Faust became a fan project extraordinaire. Now, witness his grand plans exposed for the first time!

Legendary fan artist Dice then stopped by to offer up a new logo:

But that wasn't all! Dice proceeded to kick reason to the curb and do the impossible by sketching and conceiving a new Chrono Break idea. It immediately wowed everyone. You have to stop by and see the art! Check it out:

Lennis kept things rolling with Project Unity, an ambitious project to novelize the Chrono series and its history. You have to read the plans; there's no way you won't be excited! Check it out:

Now that you've read the premise, chow down on the first four chapters!

A few days later, tushantin kicked into overdrive with an auspicious 5 MB animated Dream Splash logo! Check out the flash:

But wait, he wasn't anywhere near done. "What is the essence of Chrono Break? It is not just an addition to a franchise. Not just a sequel. But a continuation, a feeling of EPIC-ness, that many reach out for especially when so many stories were left untold."

YGF then showed up on a wave of support from tushantin with the chapter of a new story! It's entitled Chrono Break: Origin of the Dreamers, Chapter 1: Small Things Count! Have a heart for the dwarves...

Every Chrono game needs boss battles, which need boss themes. chi_z set out to make it happen, producing "Tempest", a boss battle with the same progression as Manoria Cathedral. Check it out!

Deithmare stopped in to let us know about a roleplay project set on creating a new chapter in the Chronoverse; it's called Chrono Theory, and incorporates characters and elements of both Chrono Trigger and Chrono Cross. I really love the premise! You can check it out here:

Surreal genius SGR wandered in to post a few Chrono Break plot ideas afterwards. His ideas capitalize on the idea of several Arbiters having touched the Frozen Flame across its history; check it out!

Myth was impressed by the idea of Chrono Cross as a related vision of the same universe as Trigger, and has rolled around the idea of a new, separate vision for some time. The Dream Splash prompted Myth to come in and share the idea! There's a fascinating idea about time and dimensions to be found inside. Check out...

The man himself stepped into the arena afterwards and delivered an exciting new idea for Chrono Break, complete with three illustrations. Far beyond the time of Crono, one of his descendants becomes part of the space exploration program, and Crono's awakened genes have been passed down, enabling his descendant's use of magic. What happens next? Check it out!

Zipp had already been working on a long Chrono Break fanfic, and the Dream Splash proved the perfect venue for showing off completed work!

Renderer-at-large CronoBJS stopped by with a couple renders of a 3D Chrono Break logo. Feast your eyes!

CamrocG followed with a novel idea: a trailer script for Chrono Break! Get ready for a thrillride with some familiar faces in store!

Longtime fan Cooper made a special appearance for the Dream Splash, providing a dark, ominous teaser poster for Chrono Break with two variations:

While on a quick week-long vacation, I found the time to hash out a piece of fanfiction. It's a segment from a larger hypothetical work called "Zurvan Willed", and this particular chapter is 2417 A.D. You see, King Zeal survived Crimson Echoes, and...well!

alfadrorredux was in hot pursuit with a few story fragments. They're written in script-style, allowing you to completely imagine the action in your mind with cues and all.

Self-described lurker Rowan then arrived with a well-fleshed out premise for Chrono Break. It's a real joy to read, as old and new locations and characters are described with luscious detail! (Oops, and King Zeal's in it!)

You can't keep the springtime of youth down. Tushantin continued a streak of creativity with lyrics for the Return of Lynx, based on the song Final Confrontation. Check out the darkness of the big cat!

Dice was nowhere near done, and decided to...oh hell, what Gurren Lagann quote haven't we used yet? Dice's burning blood cut through fate and unleashed a tried and true Japanese high school drama and/or dating sim! It has to be seen to be believed. Gaze upon this work of art with hot blood!

It wouldn't be a Dream Splash without a small game to go with! TheMage cooked up a small RPGMaker2003 fangame just for the occasion, and put together a walkthrough for those who need it.

A Chrono game needs a beautiful soundtrack, and Jormungand has put together a conceptual soundtrack for Chrono Break to honor Mitsuda's later work. It's really something! "There are 50 mp3 tracks around 30-50 seconds each, encoded at a low VBR. They are spread across four "discs"--none of which are complete. I leave it to the listeners to fill in the gaps. Originally I had intended to add character themes, but decided not to--again opting to leave it to the listener." There's also a track listing at the thread with delicious plot points in the titles! This is a must-read and must-hear project.

Who better to cap things off than tushantin? "This story might be too awesome for your liking. You might find yourself growing chest hairs, tattooing your brain or even setting your soul on fire. Read at your own risk!" Yep, it's a story—Atash Kedah: Break the Fires of Hell!

2008's subject was El Nido, but due to the extreme business of the site's staff, it never really got off the ground. We still had some submissions, though!

Here are the finished works from the 2007 Dream Splash!

From: Features
From: Community

Old banners are below. Thanks to Cooper for the new ones.