Creating a small scene between NPCs

This tutorial will teach you how to create two NPCs, and have them talk to each other and do other actions. It is based off a scene from the modification "Chrono Trigger: Crimson Echoes."

This tutorial involves Temporal Flux. Since these tutorials are not meant to augment your game, you should make a copy of your Chrono Trigger ROM for use with these instructions. This not only backs it up, but will prevent you from unnecessarily changing and overwriting your clean copy, which you probably want to still play time to time, no?

In this tutorial, you will use and learn the basic, following skills and commands:

As stated above, this tutorial is based off a scene from Crimson Echoes. Specifically, we're going to have Bandeau, the ferryman who appeared at the end of Chrono Trigger, argue with the new Medina elder, a Blue Imp. After a couple animations and appeals, Bandeau will storm out, while the Blue Imp will go to the window to gaze and ponder the turn of events. The tutorial will be divided into two sections; creating the NPCs, and making them interact.

Firstly, we need to clean up the event code for Medina Elder's House 1F {021}. Several happenings go on here, and we want to eliminate them so that they will not intrude upon our work or unnecessarily complicate it. Delete all Objects after 07. This way, only the String Index and Music (Object 00), and the Player Characters, will be the only ones left. 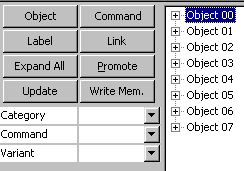 That might have seemed a little drastic, but now we're ready to make the actual NPCs. Recall that we're going to be using two here -- the Blue Imp, and Bandeau, the ferryman. Let's do Bandeau first. Create a new object (it will appear as Object 0D; don't worry). You'll see Startup / Idle, Activate, and a list of Arbitrary commands. We're only concerned with Startup / Idle at the moment, because this is what tells the game what to do the very moment you enter the room. Let's run through what to do to load him up. Use the 'command' button to make commands that you can edit to specific event functions for this list.

Let's review what we should have now.

You can disregard the little [####] tags next to the commands; just make sure the commands are there and in that order. Congratulations! If you write memory and save, there will be a man in the Medina Elder's House. However, he won't do anything or even speak yet; let's keep going. Next, we need to create the Blue Imp. Similar to what you did to create Bandeau, let's make a new object, and give it startup commands.

Okay, let's check it out.

There we have it; Medina Elder's House is now populated by these two. What's the next step? Why, making them speak and behave! Lock in and proceed to the next section.

Before we go on, let's review exactly what's going to happen. Bandeau and the Elder are going to exchange lines. What does this mean, exactly? Will we have to put a command on Bandeau to say something, then tell the game to switch over to the Elder, who will have a line? Actually, consider this. If the two are standing there, not moving and not voice-animated, could you tell the difference if text spoken by both of them was simply placed under one NPC's file? There'd be no way. Thus, we don't have to waste event space for both NPCs by putting their own lines in their own code. Rather, we can stack all the text on one character's code to conserve space. You'll see what I mean when we begin. Before we continue, however, we need to give our new characters lines. We'll use the strings I typed for Crimson Echoes.

Just for kicks, note the {instant full break} and {delay 02} in the last line. That will ensure that after two seconds, the textbox will terminate. Now we're ready to move on. We're going to put all the dialogue under Bandeau's commands; specifically, they're going under the Arbitrary0 heading. We don't need to put anything under Activate, because Bandeau is going to leave the room after the scene and not come back. Placing the commands in Arbitrary0 will also ensure that they are triggered the moment your party members approach Bandeau. Let's run through the events; I'll provide explanations for them.

This is a good stopping point to review what we've just done. More is in store, but for now, your event should look like this if you followed the above diagram: 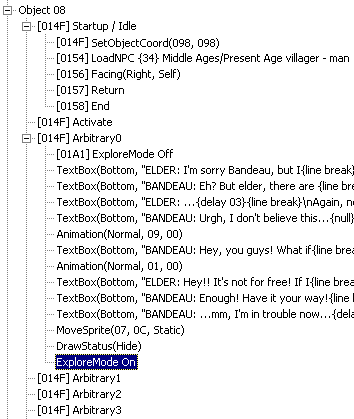 We're getting near the end. As promised, we're now going to make the Blue Imp walk over to the window and gaze out. Now, what should we put this under? Startup? Of course not, or he'd do it as soon as you entered the place. Activate? No, we don't want to have to press 'A' to get him to do it. Arbitrary0? Nah, we don't want it happening if you accidentally brush him before you brush Bandeau. Let's put it under Arbitrary1. In fact, Arbitrary 1 through D are slots for putting all sorts of actions that can be triggered. You'll see how it works in a moment. Before we work out the specifics, lets script the actions themselves.

Chrono Trigger NPCs, like the playable characters, don't have to move in rigid, robotic, linear patterns. They can walk diagonally. It is also noteworthy that if you tell them to walk to a certain tile, they won't exactly walk on its center, but will stop walking as soon as they reach it. Remember, we're putting this in Arbitrary 1 of the Blue Imp, not Bandeau, or he'd be the one walking. Keep this in mind as we go over his movements. Here's what to do to get him to walk over there:

Now, do the same thing four more times, using these coordinates for each Move Sprite command:

Now, we need to make him look at the window. 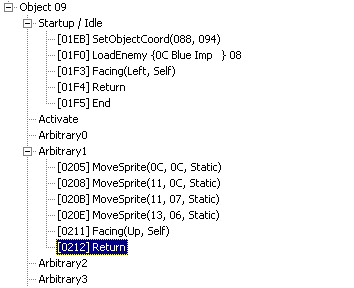 Okay, now the Imp will walk fine. But how do we make him do this after Bandeau walks out? Simple. We need to put an Object Function command back up in Bandeau's event code. Thus, after he gets the command to walk out, this Object Function command will point to the Blue Imp's Arbitrary1, which will start his own commands to walk. So, before the Return command in Bandeau's Arbitrary0 heading, put this event command.

Now, the Imp's actions will be triggered. We're almost ready! But we need to do two things to finish the scene. Firstly, the Imp needs to say something after the scene is over. This will go under Activate. Let's give him this line for now (as you did with the earlier stuff, put it in the StringIndex under Strings for this area, line 08).

You should know how to give NPCs lines now; simply give him a Textbox command, and a Return underneath it. 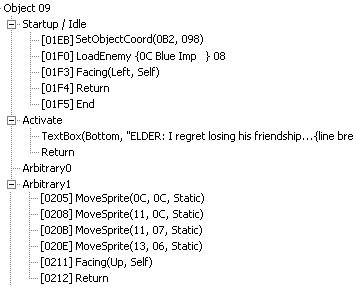 Secondly, answer me this -- how do we prevent this event from taking place every time the player enters this room? If we leave the event code as it is, every single time the player exits and re-enters the Medina Elder's House, Bandeau and the Blue Imp will be talking again, just like a time loop (TNG: Cause and Effect, anyone?). We don't want this, however; Bandeau is mad, and he's getting out of there. Now, there are two ways to do this; Bitmath or a Value-to-mem operation. Bitmath will be covered in a separate tutorial, so let's use Value-to-mem.

Value-to-mem is simply writing a value to an address in the game. At the event code's request, this value can be checked. For instance, we're going to write something the first time this scene displays, and then put something in the event code that says "Hey, if this value has been written, Bandeau shouldn't be here and other stuff should be different." BitMath is better for this kind of thing, but as stated above, this will be covered elsewhere. Now, firstly, we need to find an address to write to. If you're making a hack, you need to keep track fo this sort of thing. At the moment, we're going to use one used for a Kilwala on Denadoro Mts. Sorry 'lil Kilwala, but we're going to borrow the command that decides whether you give the player a Mid Ether or not. Here's how we do it; I first checked that scene on Denadoro and got this address for value-to-mem operations: 7F00F2. Now, follow the logic:

Okay! That's it; the scene is done, and will not happen again if you've already triggered it once. You can go check it out now. The code should look like this, altogether:

While other things like battles and Gates will be covered in other tutorials, there are regardless a couple things we can add to this scene to change it up. Specifically, we're going to do a MoveParty command, and also learn how to make the scene start without having to touch Bandeau. Let's start with the simplest first: MoveParty.

The MoveParty command is what makes Crono and his crew move around when ExploreMode is Off and a scene is in progress. For instance, if a scene existed in which explosions were happening all over the place, you would use the MoveParty command to make Crono dodge them. Since Bandeau is storming out of the Medina Elder's House, let's have Crono dash out of his way and then watch him leave. These events will suffice:

Try it out! Watch as Crono gets out of the way. Now that that's taken care of, let's make this entire scene start as soon as Crono enters the room. If you've scanned other location event code, you've probably noticed that there's an Object00 in nearly all cases. In Object00, the Dialogue Index is specified (which dialogue offset that this location draws its strings from), and music is also selected for the area. It's also the most common place for scene startups and stuff that happens as soon as you enter the room. Getting this scene to start immediately is simple; in Object00, Startup / Idle, you...

This will call Bandeau's Arbitrary0 into action as soon as the party enters the room, which effectively starts the scene. Additionally, since the scene writes a value of 1 to address 7F00F2 after it takes place, the Object Function command we use to start it will get passed over since it depends on the value being 0.

I hope you've learned from this tutorial; you can do all sorts of things now. The only limit is your imagination.