A special treasure received from the White Dragon God at Sky Dragon Isle.

The White Relic is the treasure of the Sky Dragon of Sky Dragon Isle. It served as proof that Serge defeated the Dragons and won their approval, and was a component in the creation of the Chrono Cross at Divine Dragon Falls. 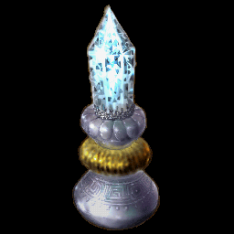