How it is used: In Homecoming - Shea's Light, Lynx is found slain in his quarters with a bloody Acacian sword nearby. Shea reveals that a nameless Dragoon slayed him; unfortunately, Lynx had completed a spirit-consuming seance prior, and his luring of souls to the manor serves as the basis of scenario 5.


How it is used: In scenario 7, The Shadow Realm and the Goddess of Death, Lilith employs a crescent-shaped scythe as her primary physical weapon. Upon contact with it, victims convulse as their souls are removed to the weapon; Kid nearly loses her life in this manner.


How it is used: In various scenarios, the Einlanzer can be used to stop the descent of a spiked ceiling by thrusting it into the floor. It can be located in the Clocktower Storage Room. The Einlanzer was forged with the Masamune presumably by Melchior; it grants its wielders special protection through magical enhancement.


How it is used: In scenario 4, SuperXtreme Alphacosmos Police Case EX Ultra, the Gatling Guns are employed by a Martian hiding in the clocktower storage room to fire at Serge, Kid, and Magil. After Magil defeats the assailant, Kid plays with the guns and pretends to be an extra-terrestrial.

Interestingly, Gatling guns were not invented until 1865, having been patented by the American inventor Richard J. Gatling. Similar remarks are made about the nearby refrigerator in the scenario, despite the presence of a refrigerator and most other modern amenities in Crono's house. This is most likely done to lend to the absurdist humor inherent in the scenario.


How it is used: In scenario 6, The Enigmatic Gigaweapon - Paradise X, Serge receives a gladiatorial sword to battle with against Kid in Gange's illusory stadium.


How it is used: In Le Trésor Interdit, Lynx wields a golden sabre in his battle with the party. He wounds Kid several times with it, and depending on the player's choices, Serge can be struck as well.

How it is used: In scenario 3, Kid and the Sunflower, Pollon attempts to use the Hyper Magic Cannon on the Mandora Monster. It shoots crystal balls and its fuse is made of ivy vines. Unfortunately for Pollon, the cannon has little effect on the monster. 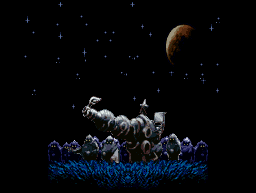 How it is used: In scenario 3, Kid and the Sunflower, Magil attaches a white jewel that has the power to steal souls to Serge's knife. Depending on choices within the game, the knife can either be thrust into Serge, interring his spirit in the jewel until a clone is made after the scenario ends, or planted in the Mandora Monster; if the latter route is taken, she will be detained inside the jewel, which shall shine milky-white. Afterwards, her soul is presumably released from the jeweled knife once Magil completes the Sacred Host spell, which has the goal of transporting Kid's spirit into Lavos, who shall be her host.

How it is used: In various scenarios, the protagonists employ a knife to do battle. Kid's knife is said to be seven inches long.

How it is used: In various scenarios, patrolling Goblins carry maces. Serge can throw his dagger at a Goblin and pilfer his mace in combat; this usually works as Serge will implant the stolen mace in the Goblin's face, ending the battle.

How it is used: In scenario 4, SuperXtreme Alphacosmos Police Case EX Ultra, Lynx uses a heavy, grey pistol to fire at the adventurers prior to attempting escape in his flying saucer. Serge remarks that it shoots "jagged beams of light." 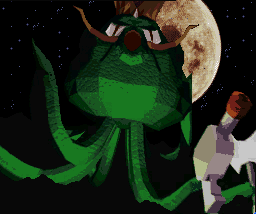 How it is used: The Masamune is alluded to as the 'demonic brother' of the Einlanzer, giving rise to the belief that both were forged by Melchior simultaneously in the Radical Dreamers Timeline. In various scenarios, Magil is inquired of his knowing the sword's former owner, Frog.

How it is used: A rusty sword is the primary weapon of the several skeleton patrollers of the manor.

How it is used: Demon Warlocks, aside from using magic, carry a scythe for physical offense. It's a short variant. 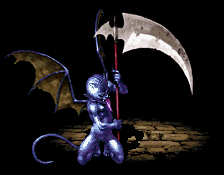