Protection from the flu, burns, sprains, and poison status effects.

It looks just like an ordinary starfish, but is said to have a secret power.

The Star Fragment is a piece of Starky's ship from Home World. When the ship crashed in the El Nido Triangle, it disintegrated into several small pieces that were scattered throughout the world. A few members of the Explorer Corps began carrying them around due to their good effects; Starky tracked them to Sky Dragon Isle, where he started mugging them to retrieve the fragments. He attempted to steal the one Serge found in the Triangle, though Serge defeated him and he later joined the party to see if his ship were still intact in Another World. 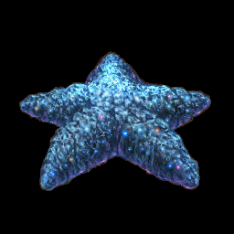