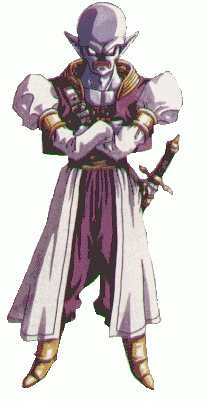 Slash is a hot-blooded swordsman in the Mystic army, and is fiercely loyal to the cause. Potentially carrying a personal grudge with Frog, he ridicules him upon meeting him in Magus's lair (Frog in turn calls him Sir Slush). Slash uses the Slasher to do his dirty work, though he is still formidable without his weapon. After the party defeated Magus, he retreated to Ozzie's Fort and made a last stand. Slash was much more a respectful and proper knight in the Japanese original version of the game. The entire "Sir Slush" joke did not exist, and Frog and Slash had a mutual respect for one another as warriors. Later, in Ozzie's Fort, Slash noted that he was very reluctant to fight Magus, but fate had apparently caused it to be so. This was lost in the English translation. Slash is also termed roughly an "outside methods" sword fighter in the Japanese version, the term in question alluding to demonic arts linked to tengu or using skulls in Japanese lore.

Slash appears with his friends in the Bend of Time.

Soyso is a pun on Soy Sauce. Slash's American name comes from the guitarist of Guns n Roses.