The Satellaview was a satellite modem add-on for Nintendo's Super Famicom system in Japan. It retailed for ¥14,000. 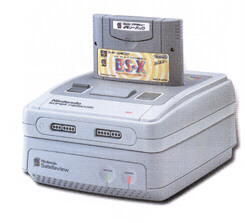 The name "Satellaview" is assumed to come from a fusion of Satellite+view. However the console's full name is seldom used; the official abbreviation seen everywhere is BS-X; BS stands for Broadcast Satellaview, and X is literally "unknown" or "nameless".

It seems that at some point in time someone on the Internet started calling it the "Bandai" Satellaview, and most websites now refer to it as this, but there is no trace of any Bandai logo or name in any known documentation or indeed in the BIOS overworld interface itself.

No matter what the game was, it was released in weekly or sometimes daily installments, usually with a total of four parts. Some games went on to have multiple stages beyond the scope of the original game, such as BS Zelda "~Map2~" (the only known name), which included nine entirely new dungeons beyond the nine already featured in the first BS Zelda broadcast. However the player data could not be transferred onto the new maps, and, just like The Legend of Zelda's "Second Quest", the player had to start over.

This application was like a game in itself. The player entered their name and chose their gender, and then moved their player character around the town. Each house or shop in the town was a direct link to a particular game, which would load and be ready for play if the player chose to enter that building.

The deluxe system contains all the above, plus:

The BS-X base unit contained some memory of its own, but not much (about 512KB) so for larger games, or (it is to be assumed) for mulitple games to be saved at the same time, the player needed to purchase this Memory Pak, otherwise previous data would have to be erased.

The BS-X was developed and released by Nintendo, and St. GIGA was responsible for the file servers and the maintenance side of things after each game had been added.

The system required a subscription to the St. GIGA satellite radio station, and during a limited time (between 4:00 and 7:00 PM), one could download games and receive news about the gaming world (as well as see some ads), and save it on a memory cart that plugged into the Satellaview. It was also possible to play quizzes, and also at the end of each game you got a score readout. By submitting your game or quiz hiscores (probably by mail, but perhaps via the interface) your score would be recorded, and if you scored high enough you might get a free gift, such as a phonecard or flash-cart.

Some games, such as the two BS Zeldas, featured "Live Voice" (streaming voice data), where a "narrator" would guide the players through the game and give helpful hints and advice.

As almost a gaming first, or certainly a Nintendo-console first, in BS Zelda: Kodai no Sekiban all cutscenes were fully voice acted (probably live), much like a radio play.

Because of the inclusion of Live Voice, the clock, and other live elements, the BS Zeldas could not be played at any time like some of the other BS-X games, but only during the set hours.

Satellaview was broadcast from April 23, 1995 to June 30, 2000. It continued receiving new games up until March 1999. The first game on the system was BS Zelda, a remake of the Famicom game Zelda no Densetsu (aka. The Legend of Zelda). It was followed closely after by BS Zelda: Kodai no Sekiban. At some unclear point there was a fallout between Nintendo and St. GIGA (something to do with shares it seems) and the service was taken down for good. 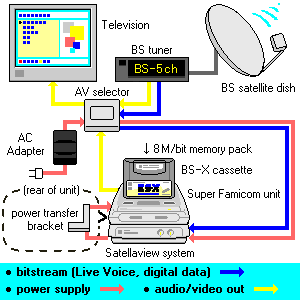