Riddel is the soft spoken and elegant daughter of Lord Viper. Raised by the General since birth and attended by a maid, Riddel grew up to be very meek and reserved; above all else, she valued those friends and family close to her. As a child, she often played with Dario and the other sons of the four Devas, including Glenn and Karsh. She was not to be left unattended, though this did not stop her from seeking out Bellflowers in Fossil Valley with Dario. As she grew older, her friendship with Dario matured into true affection, and the two entered a romantic relationship. In 1017 A.D., they were slated to marry, despite Karsh's secret admiration of her. To solidify the relationship, Dario gave Riddel his Memento Pendant, an heirloom passed down to him by his mother. These plans were tragically disrupted when Dario was killed at the Isle of the Damned. The event devastated Riddel, who, after that day, made regular trips to place Bellflowers at his grave. The event also caused much public pity and mourning for the woman by the people of Termina, who gave their condolences in respect of General Viper's magnanimous lordship. She never got over him, thinking of him each day for years after the event. Viper locked up the Memento Pendant in order to not remind Riddel of the tragedy.

In 1020 A.D., while out on a trip to his grave in Termina, Riddel met Serge for the first time. Later that night, she met him again under worse circumstances; Kid took her hostage in exchange for the escape of the party. Riddel was soon released, and stayed behind as the Acacia Dragoons went to Fort Dragonia to prepare for the defense of El Nido. After Lynx switched bodies with Serge, she was seized by the invading Porre force and held prisoner for information concerning the Frozen Flame and the whereabouts of the other Dragoons. She was almost tortured and killed by Orcha before Serge broke in and saved her; she thereafte returned to the S.S. Invincible and was reunited with the rest of her family and friends. After Dario was discovered to be alive on Forbidden Island, her presence in front of him and the displaying of the Memento Pendant awoke his memories and also the evil within the Masamune, which claimed that it thirsted for Riddel's blood. Dario soon was defeated; Riddel immediately went to his side, noting that even they were from different dimensions, they were still the same people and loved one another. She eventually suggested to him that the rebuilt Viper Manor should become an orphanage, and that she would watch over it with Dario.

Riddel was frozen with the other Acacia Dragoons during the voyage to the Dead Sea.

Riddel is the daughter of General Viper, and lived in Viper Manor all her life. An aristocratic woman, she watched the destruction of her old life when Lynx usurped the power of the manor and slaughtered her father and the Devas. Afterwards, she became Lynx's adopted daughter; Kid once hinted that Lynx probably had forced relations with her. In her room, she kept a music box that played Far Promise ~ Dream Shore, as well as a drawer full of costly dresses. During the night of Le Trésor Interdit, the Radical Dreamers confronted her in her room, where she gave them a helpful hint by directing them towards the old man in the catacombs. Riddel then resigns to her sofa, where she sits and wonders. Her fate after the invasion of the manor by Porre is unknown.

She has a strange link to the Frozen Flame. Demiforce's translation reads:

The Japanese & retranslation courtesy of utunnels:

It's possible she's an unknowing Arbiter of the Frozen Flame, or that this is all Lynx's error, believing Riddel to be Kid/schala (who really IS an Arbiter). 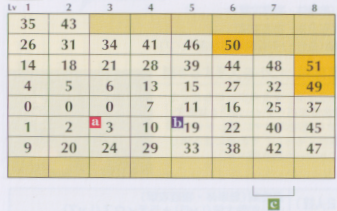