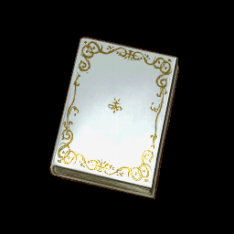 What is a plot inconsistency or plot hole?[edit]

A plot inconsistency comes from two events or canonical sources that contradict one another. Something merely left unexplained is not a plot hole. Please note that theoretical explanations exist for all these inconsistencies. However, they are very contradictory and problematic. With this in mind, flag the following as plot holes as a self test:

A. Goku spends over a year training at Kai's and walking across Snake Way on DBZ's TV series, yet is revived by the Dragon Balls -- which can only revive someone up to a year after his or her death.

B. Twenty years after Chrono Trigger, the Kingdom of Guardia has been overthrown and Crono is missing.

C. The protagonists of Pulp Fiction go to great lengths to protect a briefcase whose contents are never revealed.

D. Lucca states that Marle disappeared at Guardia Castle due to the grandfather paradox when other events clearly establish that the paradox does not apply to the series.

If you guessed A and D, you are correct. B and C are not plot holes; they are merely unexplained portions of the plot left up to interpretation or fan deduction. Stories cannot contain thousands of volumes of backstory to satisfy every need. They have a focus; Chrono Trigger's was on planet-affected eras (not on the formation of Zeal or the history of Nus), and Chrono Cross's was on foiling the Time Devourer (not on the history of Zenan politics).

Due to the special nature of games, some things are not plot holes. They include:

1. External real world influences. Just because Pierre has a French accent and Viper refers to a God does not mean that the Chrono Trigger Testament is suddenly true and that the Chrono series world is flawed for not having France.

2. Game mechanics. Chronopolis has no reason to install a savepoint on Terra Tower (storywise, a Record of Fate), but since the player needs to save, one exists.

3. Script errors. Chrono Trigger's translation was marred in some places, and Chrono Cross lists the journey to the Isle of the Damned as happening in both 1016 A.D. and 1017 A.D. With the retranslation WIP and deduction, these can rectified. For instance, Schala and Janus suddenly being step-siblings is not a plot hole, as the Japanese version made no mention of adoption.

4. Ultimania. Ultimania gets some things wrong. For instance, it lists Kid as coming to the modern era in contradiction to the date given by Chrono Cross. The only part that can really be trusted is the interview with Masato Kato, since it's straight from the Chrono writer's mouth. Don't take everything at face value.

Concerning Chrono Trigger's plot inconsistencies, it is important to note that they are probably a result of the way Chrono Trigger was put together. Yuuji Horii has even stated in an interview that he handles time travel with belief in the Grandfather Paradox, which the entire series is at odds with. In the words of Masato Kato:

For example, in Chrono Trigger, Mr. Yuji Horii wrote the basic plot line first; following that, it was editted and rewritten by me, and even further on after that, the sub-scenarios were created by Mr. Tokita and Mr. Kitase. So it all gets kinda' mixed up at the end. But the 12,000 B.C. part was 100% my original idea. After writing the story for this part, I also did the events for Zeal Palace, the dungeons, and everything else by myself (laughs).

"Trigger" wasn't exactly "smooth sailing", and a lot of the parts ended up being changed in the end. I remember back then, I couldn't stand getting up in the mornings and going to work everyday. I had the worst stomach ache from hell. But even still, I wrote all of the 12,000 B.C. events by myself and made sure that no one laid a finger on my section. Oh yeah, I also recall that when it came time to make the staff roll, they thought about placing "the most important people" on the top and just giving the title of the "scenario writer" to the top people of the planning division. I personally didn't (and don't) give a hoot about any titles or that sorta' stuff, so I just told them, "do whatever you like" - but then, Mr. Tokita and Mr. Kitase protested and in the end, I remember I was given the rather unusual title of the "story-planner". But that was pretty much how the situation went, and so even after finishing the project, I only had this feeling of relief from having rid myself of this heavy burden. I was finally free, and I could at last take on something new now. I think much of these savage feelings that I developed inside of me from the final developing stage of "Trigger", went into the making of the next project, "Radical".'

There are fewer plot holes in Chrono Cross, as Kato planned the entire story and internal logic himself. Unexplained backstory (such as the Fall of Guardia) does not constitute a plot hole.

Part of Chrono Cross's development team drew an incorrect Hero's Medal for the Key Items screen. Pierre's Medalsome tech evokes the true image, and he can also be seen wearing it on his chest in battle. Compare the art with the tech and enlarged image of the medal on his battle model: 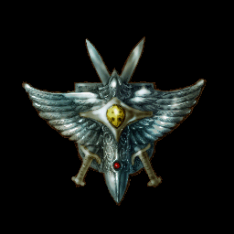 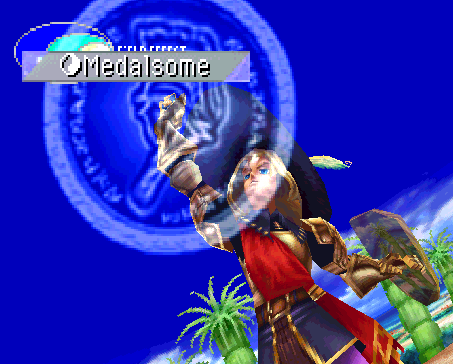 In the original Japanese version, a citizen notes that Gaspar's been gone for years, having departed to work on the "Chrono Trigger".

This is impossible; Gaspar was present in timelines before Magus came to Zeal as the Prophet. He and the other Gurus left during that course of events shortly before the Ocean Palace incident. Ted Woolsey may have caught and corrected this for the North American version, which merely alludes to an unquantified stretch of time.

At the end of the game, Lucca worries that Robo will not exist in the new future, as they've changed it by defeating Lavos. This is completely inconsistent, as Robo has time traveler's immunity (or else he wouldn't be in 1000 A.D. at the ending of the game to even be in this scene). Thanks to mystaku

Chrono Cross features three dialogue inconsistencies. While they are reconcilable (since one version of dialogue is obviously the truth), they are still documented here.

However, it is confirmed as three years by most other sources, incluing quotes by Radius and Zappa. Since it is confirmed in Another World as happening in 1017 A.D. without a doubt, the inclusion of references dating it to 1016 A.D. is an accident or oversight by the script writers. It is not a plot hole, as we know the event ocurred in 1017 A.D.

This contradicts everything else that establishes the settlers came in 920 A.D. Steena later gets it right, proving this is just a small dialogue oversight: