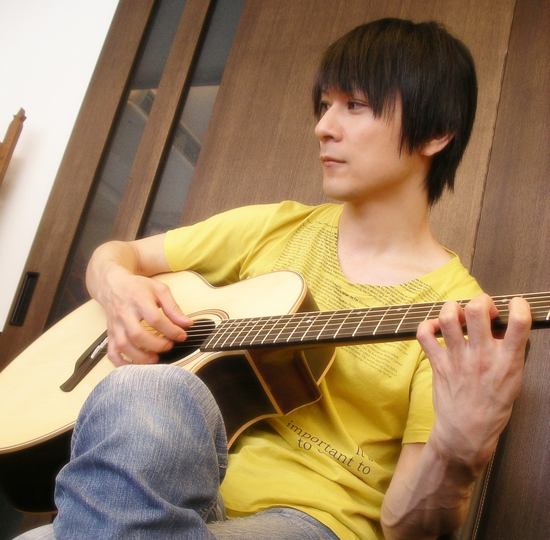 Chrono Trigger for the Nintendo DS is on the horizon, and while we’ve been talking about the Chrono Trigger Orchestra Extra Soundtracks pre-order bonus a whole lot, it’s about time we sit down with Yasunori Mitsuda himself regarding the title, its music, and of course the bonus CD.

I’ve always wanted to ask Mitusda about the close to 30 minutes of unused music that was unearthed from Chrono Trigger some years ago, and what better time than now with the new release? We’ve been fortunate enough to have Norihiko Hibino meet up with Mitsuda to ask him in person about these songs and their originals as well as other topics, such as his role on the DS remake and the possibility of arranged albums in the future.

Hit the jump for our interview with Yasunori Mitsuda.

You might be interested to know that there will be a few new songs in the DS version of Chrono Trigger. Mitsuda actually had an interesting thing to say about some of these songs, commenting, “My hard disk crashed during the creation of the Chrono Trigger soundtrack, and I lost a lot of data. Since then, I’ve recovered some of these missing songs, so now they’re finally making their way into the game.”

The songs we discuss below are not the songs Mitsuda lost in the crash. Instead, these songs have been passed around among fans as “unused songs,” which is actually an inaccurate label as you’ll discover below.

OSV: This is a really groovy track. What was it originally intended for in the game? The beat is different from a lot of the material that was featured in the game. Was this an experiment?

Mitsuda: This is actually not my song… however, it definitely uses the Chrono Trigger sound module. I think it was created by Sekito-san over at Square Enix for the PlayStation remake.

OSV: This beautiful track is slow-paced and emotional, sounding like it was meant for the end of the game. It also uses the pendulum sound from the game’s classic introduction screen. What can you tell us about this one?

Mitsuda: This is also not my song. This is another version of the ending theme that was created by Sekito-san for the PlayStation remake.

OSV: This one happens to be my favorite. It’s been on constant rotation on my iPod since the first time I heard it. It’s a shame that this amazing piece of music was not put to use! It’s actually somewhat melancholy, but also soothing and serene all at once. Please tell us about this piece of music!

So, I was very curious as to the origins of these songs if they were indeed not Mitsuda’s. My impression had been that the songs were obtained from a cartridge dump, but apparently, all of the songs in question were actually from the PlayStation remake, and more specifically, in the “Omake” mode that was added to the Japanese release. Sekito created several pieces of music for the menus in this mode, and they were not included on the soundtrack release. So, they’re not really “unused songs,” but rather music that was added to the PlayStation remake that didn’t make its way onto the soundtrack. When somebody dumped the information from the game disc, they must have came across these songs, but if you actually do a search for some of the titles, you’ll find that people have been discussing their presence in the PlayStation version for some time. Even more interesting is the fact that all the songs actually have titles! I can start calling “Twinkling” “Scattering Blossoms” now… although I think “Twinkling” has a certain magic to it.

So, a little disappointing, I know. I was hoping for some kind of breakthrough where Mitsuda would say, “Wow, I never thought people would hear this music!” Well, we have more from Mitsuda below, so keep reading! ___

Mitsuda: When I composed the original Chrono Trigger soundtrack, the main games were Final Fantasy and Dragon Quest, and both series were full of different kinds of songs for each area. As a game player, I always felt there was no consistency in the music, and I wanted to use the Chrono Trigger main theme as much as possible, like they do in film. As a result, I started working on different tempos and arrangements. Hamauzu-san, the composer for Final Fantasy XIII had actually just joined Square at the time, and he really liked this style, saying “this is very unique!”

OSV: What can you tell us about the musical direction for the DS port of Chrono Trigger? You’ve told Famitsu that you’re going to keep the music as close to the original as possible, and it definitely sounded like the original Super Famicom music when I played it at E3. Could you give us any details as to exactly what will be happening with the music in the game?

Mitsuda: When Square released the PS version of Chrono Trigger, the fans got quite angry because of my lack of involvement. That’s why Square Enix decided to call me up for the DS version.

For the DS version, I’ve decided to respect the wishes of the fans and have decided not to change anything from the original version of Chrono Trigger. I feel that if I add something, it will ruin everything.

OSV: Any chance we’ll see arranged music from Chrono Trigger or Chrono Cross in the future? The Brink of Time is one of my favorite game music albums of all time, and I’m personally looking forward to a follow-up. Is there any news on the Chrono Cross guitar album that fans have been waiting to hear for many years now?

Mitsuda: For Chrono Cross, I have all the rights to the music, and it will be 10-year anniversary next year, so I’d like to do something. I’m thinking of a guitar-only album, but I’m just trying to find the time to do it…

OSV: About this Chrono Cross guitar album, you’ve been talking about this for years. Can you tell us if there’s any progress on the album so far? Your fans have been looking forward to it for a long time.

Mitsuda: Well, I’ve had a lot of different problems come up, so it seems like it’s going to take a bit more time. Since I’m under a lot of pressure from my job right now, it’s pretty hard to continue working on it. (I’m already late on my deadline for arranging a song…)

OSV: To get back to Chrono Trigger: Brink of Time for a moment, it was a deep jazz experience which we rarely hear in the world of game music. What inspired this album, and what role did you have in the creation of Brink of Time? It’s one of the most popular game music arrangement albums among international fans, so would you consider doing something similar to this in the future?

Mitsuda: At that time, no one in Japan was trying “Acid Jazz.” So, I wanted to create a sound that no one was trying, and so I thought, “I want to try making acid jazz, grunge, and hard rock themes.” In today’s era, that sort of sound has become a lot more common, so I don’t want to make another album like that.

OSV: It has been announced both in Japan and in the United States that fans who pre-order Chrono Trigger will receive the Chrono Trigger Orchestra Extra Soundtrack album, featuring two arranged pieces. What can you tell us about this piece, and were you involved with this in any way?

Mitsuda: Actually, my role on the game is solely as the audio supervisor, and I did not create or arrange any music this time around. For the CD you’re talking about for early reservations, Natsumi Kameoka did the orchestral arrangements of the main theme and a medley. It’s actually recorded with a real orchestra! None of the sound staff at Procyon Studios was directly involved.

OSV: Thank you for your time, and congratulations on the upcoming release of Chrono Trigger.

[Thanks to Norihiko Hibino for conducting this interview and translating the responses, Justin Pfeiffer and Brad Rice for additional translation, and to both Yasunori Mitsuda and Yoshie Miyajima at Procyon Studio for their help and participation]