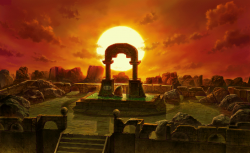 At the center of the Dead Sea lies the crown jewel of Leene Square -- Nadia's bell, dedicated in 1000 A.D. to eternal peace after Crono returned from defeating Lavos. The structure is contrasted against a frozen sunset that casts a pale gloom of orange on the scene; the actual bell has fallen off its hanging construction and lies on the ground. Miguel waited near the bell, probably because the Frozen Flame of Home World lay behind it. When Serge confronted him, the Ghost Children also appeared, cursing Serge for undoing their efforts to save the world. Eventually, the scene is consumed with the destruction of the Dead Sea.

Nadia's Bell receives special mention because the scene there is often regarded the most emotionally evocative in Chrono Cross. Yasunori Mitsuda stated that his hands nearly started shaking when he heard Prisoners of Fate.