Origin: Realm of the Looking Glass

A Mirror of Whispers is a living spirit free to roam throughout mirrors in a certain dwelling, able to spy on the inhabitants and become wise with the observance of human life. They are fashioned in an egnimatic place called the Realm of the Looking Glass, where the objective contents of thoughts are harbored (according to Magil). They are presumably used for the dispensing of knowledge; Viper Manor is equipped with a spirit and a few mirrors for this purpose. In Lynx's quarters, the spirit manifested itself in the prominent mirror by appearing as a talking statue of Venus in the reflection. It provided information on the whereabouts of the key to the treasure vault and also tapped into the memories of Magil and Kid (though it could be consulted for less noble ends). Unbeknownst to the Radical Dreamers, Lynx had previously set up the Mirror of Whispers to betray the thieves. As it attempted to draw Serge in, however, it felt guilty and shattered itself in defiance. The Radical Dreamers briefly lamented its loss, and moved on.

In the original Japanese, the mirror invites Kid first, who tells Serge to try instead. Serge barely gets a hand in before Venus seems to break herself, revealing that she is a servant of Lynx. 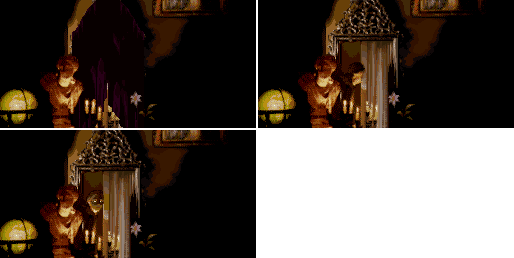