Miki is the complex and fanciful lead dancer of the rock group Magical Dreamers. Her origins obscure and unknown, she somehow met Nikki and formed the group, hoping to put her dancing skills to good use and also convey a positive message. Miki was a strong idealist; she wanted her music to have a positive, uplifting effect on people. However, she soon became renowned for something else -- her exceedingly good looks and dance moves. This dichotomy of attention to the physical versus the idealistic message intended to reach the audience often caused Miki to become distraught after shows; she'd often go off alone, and think by herself. Miki's travels took her alongside the S.S. Zelbess, where she and Nikki were slated to perform a blazing show for the tourists. After Serge and Nikki proposed the Song of Marbule, Miki became excited at how far they could take the show's meaning. She then gave a star-studded performance with Nikki which successfully transmuted the Black Dragon's nightmares on Marbule and saved the island. She grew depressed afterwards as always, though now that she was on vacation, she opted to join Serge's party to travel with him. This brought her a measure of peace and new opportunities for exploration. 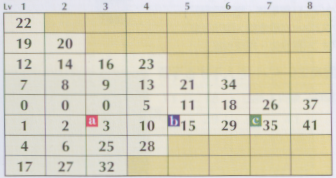