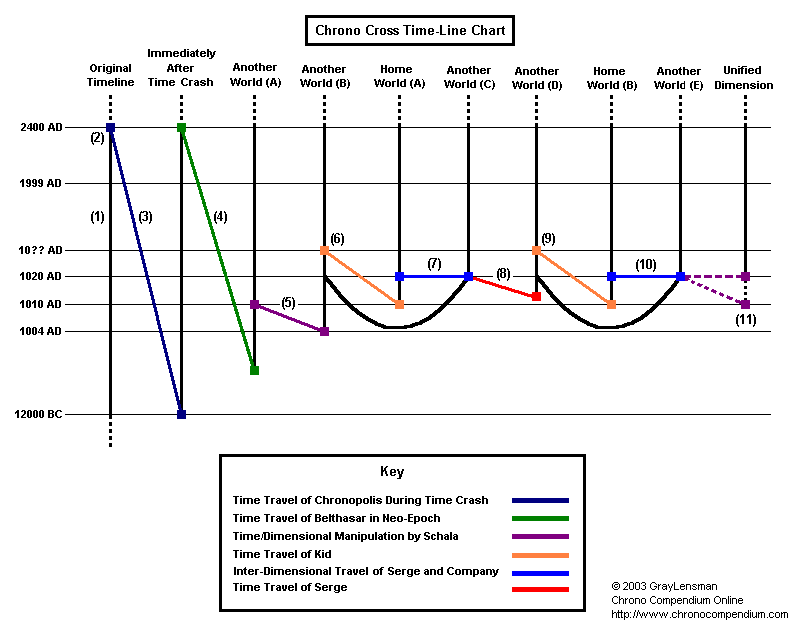 (1.) In this timeline, Lavos has been defeated by Crono and company. The ruined future was sent to the darkness beyond time, and Schala has been absorbed by a relic of Lavos to become the Time Devourer.

(2.) Belthasar somehow becomes aware of Schala's predicament and formulates a plan to free her, namely Project Kid. He organized the construction of Chronopolis and sets the stage for the Time Crash to occur.

(3.) The Time Crash sends Chronopolis through time to 12000 BC, creating a new time-line. The El Nido Archipelago is terraformed and the Records of FATE are constructed.

(4.) Belthasar makes several time warps in the Neo-Epoch to check up on Project Kid's progress and make necessary adjustments to the time-line. This of course would make a new time-line every time he time travels, but only one is shown for simplicity.

(5.) The final results of Belthasar's planning is the birth of Serge and his becoming the Arbiter of the Frozen Flame, Chrono Trigger, Assassin of Time, etc. This occurs in Another World (A). In 1010 AD, when Serge drowns, Schala reaches across time to create Kid in 1004 AD, who will eventually be able to save him. This creates another time-line, Another World (B).

(7.) The inter-dimensional distortion at Opassa Beach, the "Angelus Errare", allows Serge and company to travel between Home and Another. Traveling from Home World to Another World rewrites Kid's history, creating another timeline, Another World (C).

(8.) Serge travels back in time and rescues Kid's younger self from the burning orphanage. A new time-line is created, Another World (D). When Serge returns to the present (in the new time-line, of course), the past has been changed so that Kid always remembered being rescued by Serge.

(9.) The new Kid growing up in Another World (D) now remembers Serge rescuing her. She eventually time travels to 1010 AD and saves Another World (D)'s Serge from drowning, creating yet another time-line, Home World (B).

(10.) Serge and his companions continue their efforts to rescue Schala, even through they don't know it yet. Again, inter-dimensional travel creates another timeline, Another World (E).

Note: If I missed any other instances of time travel, those would produce new time-lines as well.

This clearly shows that there is no causal loop between Kid and Serge's time traveling. The Kid which saves Serge from drowning the first time is not the same version of Kid which Serge rescued from the burning orphanage. It also shows how the events of Chrono Cross did not all occur in one time-line. There were many intermediary steps toward the final goal of saving Schala, and history was rewritten each time.

From: Chronology
From: Theory (Principles of Timelines and Dimensions)