May 30, 2006 - N-Sider Interviews with Yasunori Mitsuda and Nobuo Uematsu

N-Sider: Alright, first... thanks very much for coming out today. It really means a lot to our site and we appreciate it.

N-Sider: First of all, with the Play concert tonight, we know that there's going to be an arrangement of some of your works. What kinds of things can we expect to see this evening?[edit]

Mitsuda: Today I'll be presenting a medley of four songs from Chrono Trigger and Chrono Cross.

N-Sider: Speaking of Chrono, if Square were to approach you to compose a new Chrono game, would you do it now even though you're an independent composer?[edit]

N-Sider: I heard that you have a remix of Chrono Cross music on the way... do you have something similar to The Brink of Time (Chrono Trigger remix album)? Do you know when it is going to be released?[edit]

Mitsuda: It'll be out within the year, and I'm doing a very acoustic sound for it.

N-Sider: Your work on Chrono Trigger and Chrono Cross is kind of jazzy... what inspired you to do these soundtracks in this style musically while considering the settings of the games?[edit]

Mitsuda: Hmm... I'm not really targeting the jazz that specifically. A lot of times what I like to do is really like to focus on world music, different world styles, and I think that comes through in the Chrono games a lot.

N-Sider: Your work on Xenogears has a very interesting musical style, really a lot different than any video game soundtrack that had come before it. What were some of the major influences in composing Xenogears?[edit]

Mitsuda: With Xenogears, I wanted to bring in some aspect of music that no composers had really dealt with before. I'm a really big fan of the singer Joanne Hogg from the band called Iona, from Ireland, and I really tried to bring a lot of Ireland into the Xenogears setting so... it would sound very... interesting to those kinds of listeners, who enjoy different sorts of music and the Irish sound.

N-Sider: In regards to new projects, what kinds of things are you most excited to do these days?[edit]

Mitsuda: The most exciting recently would be composing the arrangements of Chrono Trigger and Chrono Cross for the Play concert. I did that back in Japan around March. They're a little different from the game album, but that's the most exciting work I've done recently.

Mitsuda: I'm working on a music album for a big game company (makes "big" gesture with arms) on a game. (laughs) I cannot say yet. I'll announce the completion of it soon.

N-Sider: Of all the things you've done, what are you the most proud of?[edit]

Mitsuda: (long pause) Uh........ (laughs) Hmm......... (laughs) I really like all the work that I did! Everything has some memory with it that I enjoy. Every work is the "best one!" One thing, I'm really very proud and honored to arrange my music to be presented to an American audience. If I were to think about a video game concert, it seems mostly like a Japanese thing, like with animation or games, so it's really a great opportunity to present our culture, game music. I'm really honored for the opportunity and I hope it can be presented again in the future.

N-Sider: Any works or games from other composers you're excited to see soon?[edit]

Mitsuda: (laughs) There's a lot of great composers that I'm really excited to listen to, Kondo, Koshiro, (gestures towards Uematsu) and of course Uematsu-san.

Mitsuda: Yes! I'm very excited to bring in the kind of game music that many people in America are wanting to hear, so keep listening and you will hear from me! 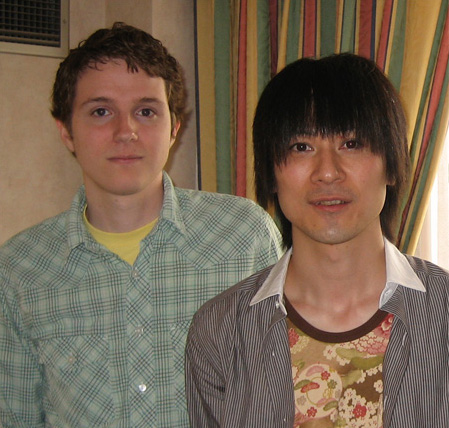 N-Sider: Thanks very much for doing this interview for us, we're really excited to see the concert.

N-Sider: Every Nintendo fan at E3 this year was very excited to hear that you're doing work with Masahiro Sakurai on Smash Brothers...[edit]

N-Sider: How much involvement do you have with the project?

Uematsu: It's just actually the one song, the title song, that I was asked to write, and that was a real surprise, very nice to have that opportunity. I didn't think it was really going to be a big deal, but it was really fun to work with and it turned out really good. (laughs)

N-Sider: So are there any plans for you to do more songs for the game?[edit]

Uematsu: If [Sakurai] asks me I'll do anything! (laugh) There isn't really an actual plan, but in Japan we're going to do something. I'll work with Sakurai again, we just don't know what yet. (laugh)

N-Sider: Did you work with any team, any Nintendo team to compose the song? Did you see the trailer first and then write the song, or did you write the song first...[edit]

Uematsu: Well, I was actually kind of monopolizing. They asked me to make the song and so I kind of had a chance to play around by myself and make the song, and then they came along and did the trailer based around that.

N-Sider: Do you have any other projects going with Nintendo?[edit]

Uematsu: No, no. Mr. Kondo is here today with me though, so I'll be asking for a job. (laughs)

N-Sider: Some of us at N-Sider are very big fans of The Black Mages (Uematsu's rock band). Any plans for another show in the US or a third album?[edit]

Uematsu: I came here last year (with the More Friends concert) with Black Mages, that was such a big hit, and that was very surprising for me! The actual plan right now is really nothing, but I'd like to bring us back. There's also the third album, yes, I'm working on that.

N-Sider: Have you thought about The Black Mages doing other songs from different composers like Mitsuda-san?[edit]

Uematsu: Hmm! For the third album no, but maybe on the fourth one. (laughs) I've got so many things also going on that it gets hard to focus on The Black Mages sometimes.

N-Sider: What are some of the other things you've got going on? There's Blue Dragon with Mistwalker but what else do you have going?[edit]

Uematsu: The deadline is right there for Blue Dragon! So right now I'm focusing quite a lot on just Blue Dragon...

Uematsu: Well, after that I have Lost Odyssey with Mistwalker, and... at this time I'll be composing ten songs for that, so that's my next project.

N-Sider: What's your relationship like now with Yasunori Mitsuda after having worked together on Chrono Trigger, and been together at Square? Do you still keep in contact...[edit]

Uematsu: Ooooh, well I haven't worked with him, but I did have breakfast with him today! (laughs)

Uematsu: (laughs) Really, we're both pretty busy and we haven't had much of a chance to meet, but we do keep in touch with holiday cards, e-mails, things like that. Not really in person though, so it was nice to meet up for breakfast. (laugh) We had been working together at Square for quite some time... so I was like the boss and he was the... lower. So, of course it was neat to see him again. (laughs)

N-Sider: Kind of a nostalgic question... what was your inspiration for "Dancing Mad" from Final Fantasy VI? It's a lot different than most game music because of its length, very operatic...[edit]

Uematsu: Well, usually when you make a song it's two to three minutes in length, you have the introduction, the main part and the ending. But... for Dancing Mad I didn't really put a stop on it, so I kept on working on it, working on it, working on it (laughs) and that really let the song... you know... I got to play around with it for something like fourteen minutes, and it's really one of my favorites. It's one of the songs that I'll be doing in Germany this year, at their concert. It'll have lots of pipe organs. (laughs)

N-Sider: What will we see at our concert tonight? Kind of a medley or uh... maybe a One Winged Angel encore?[edit]

Uematsu: (laugh) An encore! I actually just got here yesterday and I haven't really reviewed anything so I don't really know... it's a secret!

N-Sider: Aside from listening to other various bands, what kinds of activities or hobbies do you have to get inspired?[edit]

Uematsu: Well, let me think... I don't really have anything that inspires me particularly to write, but when I know I have to compose a piece of music, I'll just put a time limit on it and work on it. (points at his shirt)

Uematsu: (laughs) If I'm not working, I'll be outside, being with nature... just being out.

N-Sider: What are some of your favorite games to play?[edit]

Uematsu: Well... I haven't really had a chance to play a lot of games lately. It takes a lot of time to play games. When I want to play a role-playing game like Final Fantasy, it takes a big time committment, and I don't really have that lately. (laughs)

N-Sider: Did you have a chance to see Nintendo's new system at E3? What do you think of the controller?[edit]

Uematsu: (in English) You mean, Wii!

N-Sider: (laugh) Well, they're telling me to wrap it up. Thanks very much again... we'll see you at the show tonight.

Uematsu: No problem! See you there. 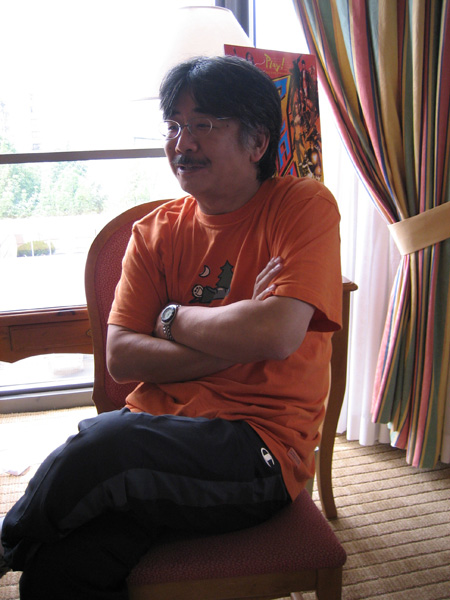