The Mandora Monster is a ferocious entity that takes the form of a sunflower with a face. It is a very perverted being; those who try to cut it down will meet frustration. Repeated attempts will lead to the Mandora Monster becoming angry, growing to a tremendous size, and fusing with the antagonist to become a powerful monster bent on destruction. This fate befell Kid in Kid and the Sunflower after she hacked away at the sunflower due to its cat calls; the monster immediately fused with Kid, rendering her skin green and her upper body exposed. Her anger controlled her thoughts, and she was empowered with magic strong enough to obliterate Viper Manor (not even the Hyper Magic Cannon could defeat her). Magil informed Serge that the key to destroying a fused Mandora Monster was to show it love, and insisted Serge kiss Kid. He risked his life and accomplished the task, returning Kid to normal; the monster left behind a seed. Magil noted that the seed was worth one billion in gold, but Kid once again unleashed her unbridled rage and stomped it to bits.

A mandora is a type of sixteenth-century lute. It is also the name of several towns.

The Mandora Monster's name may have been an alternate spelling by the developers of Mandrake, or romaji Mandoraga.

"According to the legend, when the root is dug up it screams and kills all who hear it."

In Radical Dreamers, Demiforce translated this as the effect:

"Gyaaahhhhhhhhhhhhhhhhhhhh!!!!!!!!!!!!!"
Its blaring screech is as excruciating to hear as a hundred hands simultaneously scratching down a chalkboard!
I feel faint... my knees are going to buckle if I hear any more of that deafening screech!

Originally, the simile was that the scream sounded like a hundred screeching cats. 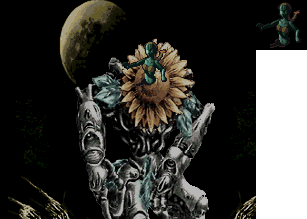