Leah is an anachronistic girl found wandering Gaea's Navel by Serge and his party in 1020 A.D. Leah was born in a prehistoric village of hunters and warriors; her father died when she was very young, and her grandmother told her that he had gone to the sky. She came to El Nido after facing "land-anger" (presumably an earthquake); she found the area to be completely new, with no hint of the other villagers. Learning that the Tyrano resided there (albeit not seeing its form or understanding its identity), she discovered several other monsters. Not long after her arrival, Serge and his party flew in on a Wingapede and met her; she mistook them for messengers from the sky, and asked them if they knew her father. She then told them of the Tyrano and noted that if one were to thrash the monsters around the island, it would wake up. Serge succeeded, and the Green Dragon appeared to Leah's surprise; they defeated the Dragon to receive the Green Relic; afterwards, Leah joined his party and eventually stayed at Hermit's Hideaway when not fighting. Leah's ambition was to return home and find her father; she later remarked that she would name her child Ayla when she got back.

In all probability, Leah most likely slipped into a strange Gate or temporal distortion in the years before 65000000 B.C. The veracity of her status as Ayla's mother is debatable, but it is possible that Mystic Mts of prehistory was temporally active (Kino also strangely appeared there one day). The Gate took her to Gaea's Navel (which existed even before Chronopolis terraformed El Nido, which provides for her ability to return and mother Ayla before El Nido would have been created). After Chrono Cross, she presumably returned to her home time, but the mechanics and specifics of this are an enigma. Leah's pendant is red in official art depicting a battle, but blue in the final game art. It is unknown if her pendant has any significance, or if the red pendant were intended to be Dreamstone.

Possibly Rhea from Greek mythology, the "mother of the Gods". 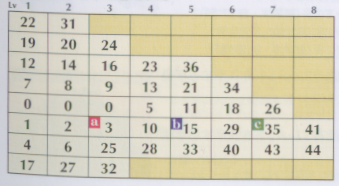