Lara is the mother of Lucca and the wife of Taban. Her legs were permanently injured during an accident in the year 990 A.D. However, later in the game Lucca goes back in time to prevent the injury - after which Lara can be seen walking around the room instead of simply sitting down all the time. The event also affects how she is displayed at the Moonlight Parade. Note that per Legends of Localization, the code to save Lara in the Japanese version of the game is L-A-L-A. 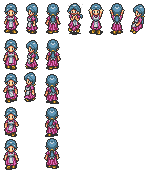