The Knight Captain is the leader of the Knights of the Square Table of the Kingdom of Guardia and is in charge of Guardia's military forces. He dons gold armor in battle, such as when he helped make a stand against the Mystics at Zenan Bridge. Later, he would assist the party by moving the Rainbow Shell out of the Giant's Claw. He is the brother of the castle Chef. Admiring Frog, he noted that he would relinquish his position so that Frog could take it at the amphibian's request, though Frog turned the offer down. He was probably the only person in the Guardian army to realize Frog was once Glenn. This realization was suggested only in the original Japanese, as it was omitted in the English translation of the game. 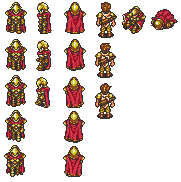