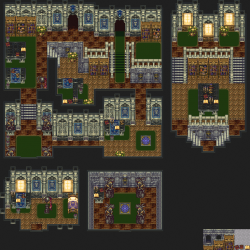 Kajar is a scientific and magical research city of Zeal, undertaking analysis in various studies of the physical world. Opposite their counterparts in Enhasa, the people of Kajar take interest in the mechanics of nature and reality. Kajar's scientists were responsible for enhancement tabs, advanced magic, and engineering achievements of the Enlightened Ones. The Ocean Palace, though masterminded by Belthasar, was perfected in design at Kajar. This industrious establishment breathed life into the future of Zeal by making its physical wonders possible.

A Nu sells goods, but regrets that he cannot sell Lode Shields. Opening the Water, Wind, and Fire books reveals Belthasar's secret room, which holds a Black Rock. The trickiest aspect of Kajar is obtaining a Speed Tab located in the upper right corner of the map. To do so, one must exit the main room in the upper right corner, then search the back right wall of the smaller room just entered. The Nu in this room will also drop a Magic Tab if the Nu's scratch point has been learned in Zeal Palace. Lastly, after powering up the Pendant, Crono can buy new goods from the Nu if he tells him that the pendant is not Schala's.