Chrono Trigger is the long anticipated prequel to the smash-hit Final Fantasy VI on the Atari 2800. Chrono Trigger was shipped with the Super Nintendo Entertainment System in a combo cartridge with Duck Hunt but fans of the series instantly knew they would be skipping school or work to partake of the action/real time strategy game play of Chrono Trigger and foregoing renewing their hunting licenses. 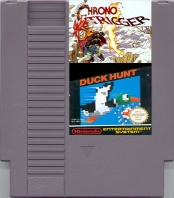 The story revolves around a young girl named Lucca that goes on a quest to make her mother walk again. On her way she finds many new friends, ventures through exotic locations and shoots throw waves and waves of monsters in Contra style action that would make Chuck Norris blush. The turning point of the game is when Lucca discovers that her mothers legs were eaten by the gargantuan extra terrestrial parasite named Magus. In a fit of rage she battles Magus but is unable to defeat his awesome power. Lucca knows that only one other being is as strong as magus so she seeks his help, Goku, the ultimate super Saiyan. Native to the world of Krypton, finds his way to the Chrono Trigger universe to aide Lucca’s search for her mother’s legs.

The reaction by the fans was overwhelming at the site of their anime Icon but Warner Home Video was none to pleased with the obvious Copyright Infringement of the Character “Nu”. The character Violet (Willy Wonka and the Chocolate Factory) was not available for comment but her agant called the game “despicable” and “absurd”. The suite was settled out of court for 100,000,000,000,000 yen, which comes to seventeen dollars and thirty-seven cents American. Square maintains their innocence to this day but let’s let the fans decide.

Much to the surprise of game developers the A-Team was fully responsible for the production of this timeless piece of art; Akira Toriyama, Mr. T, Nobuo Uematsu, Snake Pliskin, Yuji Horii, Emperor Hirohito, and Yasunori Mitsuda. This ragtag bunch of industry newbies shocked the world with their complex understanding of programming languages, graphic design, and music composition. Even three years after its initial release Chrono Trigger competes even the greats of today like Final Fantasy X-III Riku’s Revenge, Tetris Wakeboarding, and Grand Theft: Auto Vatican City. In conclusion I give Chrono Trigger a final score of octagon, but I was really considering triangle, far from a dodecahedron, but still a classic.

This was obviously a joke, but hopefully a funny joke. I would like to write more for the site if there are opportunities. I give some credit to these guys http://www.somethingawful.com/truthmedia/ for the style.