Refined from the body fluids of a hydra, this liquid is the only known antidote for hydra poison.

Hydra Humour is a rare panacea extracted from the Hydra creature of the Hydra Marshes. It is the only known antidote to Hydra poison; Hydras were slaughtered in large numbers after its healing properties were discovered by mainland settlers. Their body fluids would be refined into humour, which would be taken back to mainland Zenan and elsewhere to fetch a high price. This harvesting killed off the Hydra population in Another World and dwindled it to a single mother in Home World. After Lynx poisoined Kid, the rarity of the humour caused a severe difficult for Serge, who set out to find some and eventually killed the last remaining Hydra for humour (though her whelp survived. Also, depending on events, Norris, who is equipped with Hydra humor presumably because he is the leader of the Black Wind, gave some to Kid while passing by). 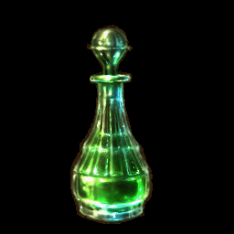