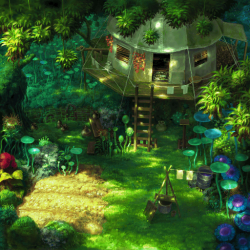 
Hermit's Hideaway is a small island in the northeast corner of El Nido. Constructed by Chronopolis with no real purpose, it was adapted for living by Radius of the Acacia Dragoons after he retired in both dimensions in 1016 A.D. In Another World, Radius lived and meditated there for four years, having minimal contact with the main island. In 1020 A.D., the establishment was burned to the ground by Lynx after Serge ventured there to seek Radius's knowledge concerning entering Fort Dragonia. Radius survived by hiding in an underground complex he built around the same time he modified the tree for living four years before. There, he counseled the boy and his party, and then rested for a few days. He was met again after the Acacia Dragoons convened there after escaping the main island and the Porre army. Lynx attacked again, confronting all of them on the commons outside; fortunately, the S.S. Invincible stood ready to escort them away. Serge later returned to freeze a burned patch of ground; after he went through Chronopolis, Kid was taken there to recuperate. She was found to be in a coma; as Serge leaned over here, Masa & Mune recognized her as having the features of Schala, and allowed Serge to travel back in time and calm her memories.

In Home World, Radius served as chief of Arni, leaving the hideaway mostly untouched. He returned with Serge to retrieve a Garai Keepsake to allow passage through the Isle of the Damned for the Einlanzer. Several of Serge's smaller party members came to enjoy the atmosphere of Hermit's Hideaway, and stayed behind when not traveling with Serge directly.