Each step should return an integer value; for example 2.7 should be 2.

f is a value determine the percentage between max damage and min damage. You can find it in this thread: here. For example, Serge's weapons have a value of 20%, then f will be a value between 0 and 20.

It's almost the same as a normal weapon attack.

For example, if the target and element are both red, red color circles will have no effect.

There may be more behind the formula, but as far as I know field color doesn't affect it.

Each character performs the attack separately, and then the game adds the results.

Same as normal elements, but the tech only uses the magic power of the one who chooses the command.

After a weak attack, all 3 values are increased, the increment is:

I've no idea about the Hit% value shown in equipment menu. It is different from all three above and is not used in battle at all.

From the formula we can see heavy and medium have nothing to do with character ACC value, so a heavy attack usually misses if you start with it.

Level Up and Stat Bonuses[edit]

I found some people ask about how to max all statistics at 99th star, such as "why is my Serge's strength 87 instead of 88; it was 88 in my last run", or "why is Riddel's magic attack not 60". I searched via Google, some say it is all random (and it is almost true since I myself saw Guile had very poor magic attack, at least before Serge became Lynx). And someone says the bonus can't be changed by the save/load trick; I tested before a boss battle, and it is true. Later I found bonus values for next star are determined after a boss battle which gives you a star and will be carried in the save file until you receive next star.

I'm still not sure how exactly the formula works, but here's what I've figured out:

1. Your team receives some kind of "exp" after a regular fight, based on what star level you are currently at, until it reaches a certain value (ThresholdPoint). It will be zeroed if you gain a new star level. For example, at level 1, you will receive 1 point per fight. But after 8 fights, it just stops increasing. But at level 50, you receives 3757 points per fight, but stop receiving any after 3 fights.

2. The "exp" interacts with your stats growth, but not by adding up. It is still unknown. However, it seems the rule is fixed instead of random. That means the save and load trick doesn't work here.

3. Total bonus will not get past about 66%-69% of next star bonus. For example, if Serge will gain 12 HP at the next star level, he can receive at most 8 HP during those regular fights.

5. Small values can be added to next fight, somehow. Though the formula is unknown, but I've noticed, if next star bonus is only 1 point( for example, strength bonus), the character can still receive the point after several fights, in my test case, it should be before the ThresholdPoint.

6. Add a new member to your 3-person team after the ThresholdPoint? Well, he/she will still receive a bonus, and quite a lot in the first fight, but tgus will drop sharply later, and total bonus still can't get past 66-69% of next star bonus.

Most used character gain stats like the red curve in the picture, and those you never use are like the blue one. 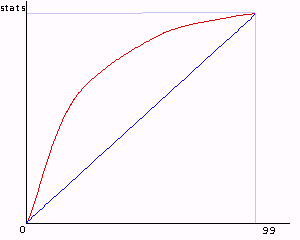