Fiona is the resident of a villa midway between Truce and Porre, and a caring environmentalist. Her family which kept a special seed for generations. She grew up with a boy named Marco in the forest, and later married him; he became a soldier. She cared for the sprawling forest surrounding her house deeply. The woods had great meaning to the two, and while he was absent to fight in the Mystic War, she watched over the land. At some point, she obtained a Seed from the Mystics. Unfortunately, the forest suffered much trauma in the conflict, and a substantial portion was destroyed leaving desert in its wake. Fiona's efforts to replant the lost trees failed, as desert monsters (specifically, Retinite, a possible creation of Magus) unleashed in the war were draining the plant life and killed new seedlings. Marco returned after the party's brush with death in the Ocean Palace Incident, but the efforts of the couple were still futile; even though they deduced that the monsters hated water, Marco and Fiona could not handle them alone.

Help came in the Fiona's Forest Sidequest; the party ventured beneath the ground in the Sunken Desert and dispatched the monsters. After Retinite was defeated, the desertification stopped; however, it would take centuries to revive the forest. Robo nobly volunteered to stay behind and help Fiona's dream for the next four hundred years. In honor of her efforts and care for the forest, Fiona's Shrine was erected in place of her villa. Robo was interred here until 1000 A.D., when he was released to behold the expansive forest he helped create.

Some animations for Fiona's sprite were not used in the game, and depict her watering plants. She is a probable descendant of the Zeal Plant Woman due to her seed ownership. This detail was lost in the North American version. 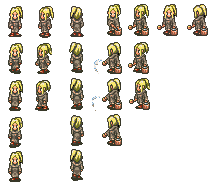