Fiona's Villa is at the heart of Zenan, and is home to Fiona and Marco. The building is nearly encroached upon by the growing desert, and Marco is away for a considerable length of time during the Mystic War. Upon his return, Crono and his party defeated Retinite and restored Fiona's Forest. Fiona's Villa was later converted into Fiona's Shrine, a permanent veneration of the brave woman and Robo. 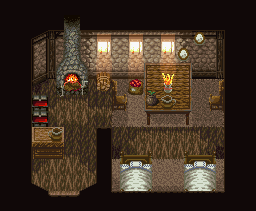