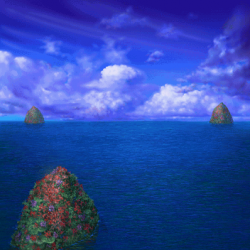 The El Nido Triangle is a mysterious patch of ocean located between three rocks known as "Triplet Isles" in southern El Nido. The mythical Dragon King Palace was rumored to be near the area. The legend regarding the El Nido Triangle was intensified after Starky's ship crashed there in both dimensions; onlooking fishermen reported a mysterious beam of light and a proliferation of star-shaped stones. Further investigation revealed a layer of air beneath the sea that allowed exploration of the sea floor without any equipment. This was caused by Starky's crashed ship's emanating a special force field. In Another World, the ship survived intact, and Starky retrieved an anti-gravity device and his StarStruck tech from it before venturing to Terra Tower. In Home World, Porre took an interest in the happenings at the Triangle, and dispatched a small expedition to the area. They did not return due to unknown circumstances.