Make a backup copy of your CT ROM. I will assume if you are editing with Temporal Flux, you have a CT ROM. Asking me or anyone at the Chrono Compendium for a ROM will probably get you laughed at or dusted away, or possibly your soul consumed by Lavos! >:-) Anyways, once you have a backup made of your ROM, take the original and put it somewhere you will know to never, EVER touch or modify. If you screw up your ROM, you can just make another copy of the unmodified one to edit. Also, my advice would be to make periodic backups everytime you make alot of changes. This way, if you find a bug, you can go back a version (or a few if unfornately need be).

Now, load up TemporalFlux (will be "TF" from hereafter). TF will ask you if you want to remove the header file, seeing as there is no other way to edit your COPIED ROM with this wonderful editor, select yes to enter the continue.

Once you are in, press key combination(or shortcut) "Ctrl-L" to open the Locations windows. You can also do this by going to Menu > Windows > Locations. Although, if you plan on using TF I suggest that you learn shortcuts as it will make editing alot easier and faster. While you are at it, go to Menu > Windows > Location_ > Music (don't get confused, "Locations" and "Location_>" are two seperate things. "Location_>" is a submenu and this time this is the one we are going to. Select Music within this submenu, this will cause the tab that is shown in the screenshot below to appear.

Now within the locations combo box (circled in blue above), go down to location {0F5} Death Peak South Face. Ignore the location I have loaded in the screenshot above; it's been a VERY long time since I have slept. Click the little Music tab that I highlighted for you in the screenshot above. Change the music to the unused {52} Singing Mountain. An example is shown below. Singing Mountain gives Death Peak a very nice touch and you will feel great knowing you did this yourself! :) Now press "Ctrl-S" to write this to memory, this will temporarily save this data. "Shift-Ctrl-S" will pernamently save changes to the ROM file, so do not forget this! Ok, so you changed the music on one location, now we need to change all of the rest of the locations so that the music will match up correctly. 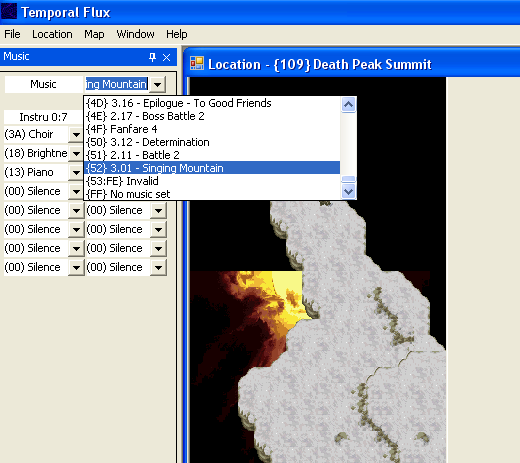 There are a few of the locations that have Lavos Spawn Battles. We want to change the after-battle music to Singing Mountain as well. Since we are at {1EF} Death Peak Northeast Face, which is one of them, click on the "Events" blue text in the location properties. A screenshot below shows where to click. 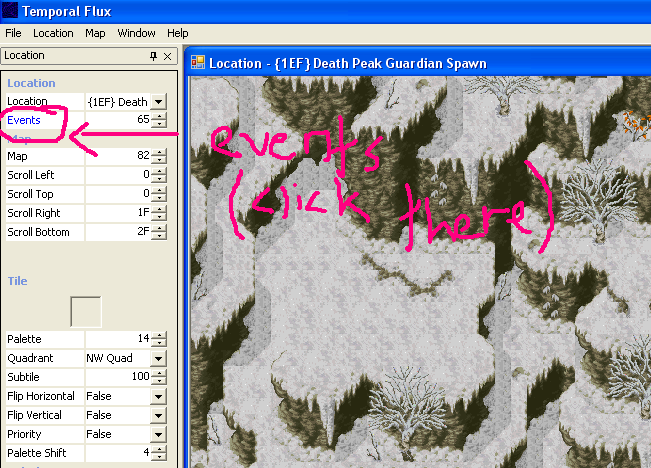 This will pull up the event editor which edits scripts for locations. Scroll a little more than halfway down this window to where it says [025A] SoundCMD(PlaySong, {3C} 1.17 - Silent Light). Click on this, and in the sidebar change the song to {52} 3.01 - Singing Mountain. Then hit the Update button in the upper left corner to make temporary changes. If you want, you can also change the Boss Battle 1 theme for the Lavos Spawn battle to track {51} Battle 2 like I did. Then hit the WriteMem button; this saves the event data. Close this window and hit "Ctrl-S" to write this to the temporary data. This way, after the Lavos Spawn battle is over, it will change the music back to Singing Mountain, which is playing before battle. This step also needs to be done to locations: {108} Death Peak Cave, and {0F7} Death Peak Northeast Face. Make sure you hit "Shift-Ctrl-S" to pernamently save changes to the ROM. 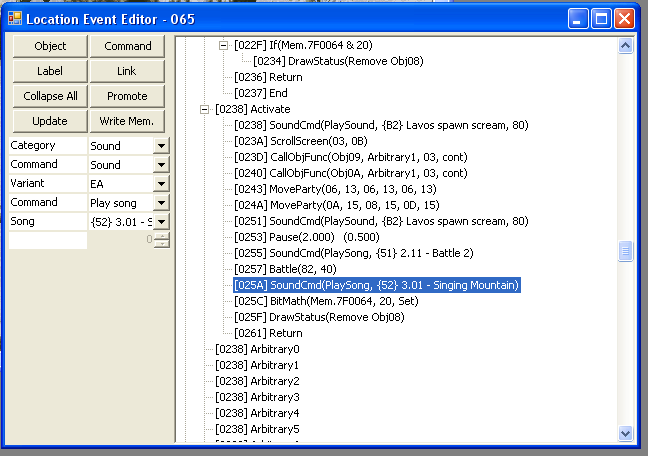 That's it! Now when you play CT, the areas at Death Peak will have the new music and will sound totally cool. If you changed the Lavos Spawn battle music too, the battles will have a cool battle theme that was previously unused in the game. However, as Melchior says; "Don't think that's the last of my bag of tricks!" ...or something like that.

When you are changing the location music, you can select and change each individual intrument! This will change the way that particular music track will sound anywhere in the game, not just that location. Another tip I'll give you concerns changing an instrument for a song you can load any location. Select the song you want to change, modify the instrument, save, then change the song back to whatever it was originally. This means you don't have to find a location that uses the particular song you want to edit; you can do it anywhere. Just be aware that if you change a song, and forget to change it back to it's original, the location will play the *new* song.... unless of course that is your intent. :) If you are changing a location's music, just be sure to check and scroll through the event data and change the song there, if applicable.