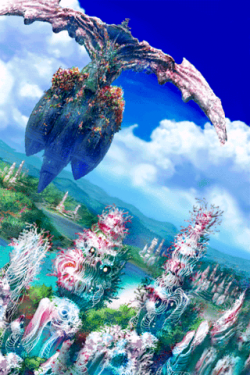 The Dragonians are an evolved form of Reptites. They came to exist in the Reptite Dimension as the Reptites evolved over millions of years; they grew in close harmony with nature, fashioning their dwellings out of natural material that did not disrupt the ecosystem. They also explored the science of controlling nature, culminating in the construction of a mighty floating city called Dinopolis. At the head of the superstructure sat the Dragon God, a cybernetic machine being capable of controlling and shaping nature to its will. Probably in 2400 A.D. in that dimension, Dinopolis was slipped into the Keystone Dimension by the planet to counteract Chronopolis's introduction to the past. A war followed, in which Chronopolis subjugated Dinopolis and captured the Dragon God; it subsequently divided it up into six parts, and terraformed El Nido to allow settlement.

Though Dinopolis sank, many Dragonians survived the fight and settled with Humans in El Nido. Using Chronopolis's Elements system, they forged devices capable of unleashing a certain force of nature when activated. They also built forts and other establishments based on their old technology and the Elements, including Fort Dragonia. They maintained their traditional rituals as well, using Divine Dragon Falls, for example, as a place of worship (probably to the planet). They mingled well with the humans; some presumably married and bore Demi-human children. The Dragonians also created the Dragon Tear over this period, capable of switching bodies between two hosts. Eventually, in 920 A.D., mainland humans came to El Nido. For reasons unknown, this spelled the doom of the Dragonians, who soon became extinct (whether because their nature was unbalanced or because the mainlanders hunted them). The ruins survived, as did their influence through the creation and sale of Elements.

The exact physiology of the Dragonians is unknown. They did have tails, as stated in Fort Dragonia, though it seems unlikely that they were full fledged Dragons -- if only because the Reptites were bipedal creatures without special wings or other appendages. It is also a mystery if the Dragonians were aware of Project Kid, or Belthasar's plans. The Dragon Tears were integral to the creation of the Chrono Cross, the one item capable of saving Schala from the Time Devourer. In an unused line from Korcha, he states that the Hydra are a subspecies of the Dragonians, which supports the presumption that Demi-humans are also descendants of the species.