Creating a new area from scratch

This tutorial will teach you how to create a totally new area from scratch, and link it to the Overworld.

This tutorial involves Temporal Flux. Since these tutorials are not meant to augment your game, you should make a copy of your Chrono Trigger ROM for use with these instructions. This not only backs it up, but will prevent you from unnecessarily changing and overwriting your clean copy, which you probably want to still play time to time, no?

In this tutorial, you will use and learn the basic, following skills and commands:

Creating the Area in Overworld and Locations[edit]

First thing's first! We need to create a new house on the overworld that we'll be accessing. Let's make it reside in 1000 A.D., the present, and put it near Zenan Bridge, where it can be easily accessed even in a new game. You can choose how it looks down to the last detail, but for simplicity, I'm going to go with a simple design. Remember that houses are placed in Layer 1. 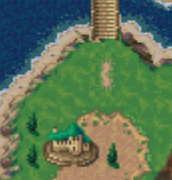 Now, the house is on the map. That seems easy enough, but now we have some decisions to make. Firstly, we need to figure out where we will place our new location in terms of maps. When Chrono Trigger was made, the programmers packed in data and locations very neatly, leaving little empty space for playing around with. However, a few empty spots are lying around. For instance, the lower half of Manoria Cathedral's Map, number 65, is mostly black space. We're going to put a small room there. Feel free to copy what I've done. I've put a small corridor at the bottom. 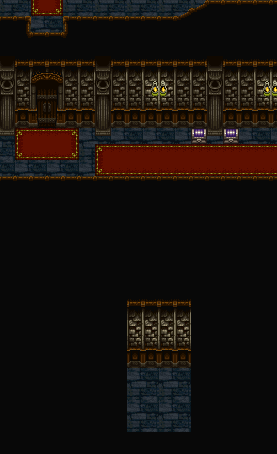 We now need to make a new room pointer. Location pointers are what tells the game what map to load, what palette to use, and what to prevent the player from seeing. It also instructs the game which events to load. In Temporal Flux, they're how you select locations and stuff to edit (appearing as {001} Crono's Kitchen, {002} Crono's Room, and on down the line). There are a few unused location pointers, but as a rule, never use anything below 1F0. 1F0-7 are Overworld pointers, and anything to 1FF after that will probably give you junk. There are a few other empty ones; we're going to use {1CD}. Save your work and go ahead and pick that address in Locations.

Empty, right? We're going to tell it how to find the new room we just made. Let's run through it. You should first input the following information on the basic location sidebar. You can find it all out by looking at the actual Cathedral area.

Do what you need to in order to have Temporal Flux recognize the changes (like in map, put 64, and then press the up arrow button after the other values are set), then save. There's the Cathedral! Now, let's set the scroll mask. The scroll mask is what makes sure you can't see other rooms and stuff that are next to the one you're in in-game. For instance, all the Truce and Porre rooms are on the same map. However, if you were in Truce Inn, and you could see the Porre Inn a hop over the wall, that wouldn't make much sense. Temporal Flux 1.7 doesn't support scroll mask editing, but later versions do. Simply use the "Scroll (Direction)" boxes in the basic Locations navigation bar on the left. Now that the actual location is ready, let's make an exit to the Overworld.

Configuring Exits to and from the Area[edit]

Hit up Window - Location Exits. Also, turn on Map > Exits for a better view of what you're doing. Since this 1CD was previously unused, there are currently no exits. Bump Total Exits up to 1; a red square should appear in the upper left of the map. Play with the X and Y values under source until you get it to the bottom of the new area (for my map, it is X 21, Y 3C). Make Width 2, so the lower right half of the last floor tiles will function as an exit. Now we must configure the destination; this exit will take the player back to the Overworld. Since the Overworld works in subtiles, getting the coordinates for Destination is a bit complicated, but go ahead right now and put {1F0} Present, Facing Down. Now let's go back to the Overworld. Scope it out and find the little house you made for the new area. Put your mouse right on its doorstep and look at the coordinates in the bottom right corner. Mine say E7, 228.

Now, with all exits to the overworld, you need to do a little computation. Shave off the last digit from the above (in my case, I'd have E, 22), and double these numbers in hexadecimal. If you aren't sure how to do that, load up the simple Windows calculator, and click the Hex button on the left (you have to be in scientific mode). Now you can work in hex. Doubling E and 22 gives me 1C and 44. Before we use these, add 1 to each, as this will make Crono center up when he exits to the overworld. The coordinates are thus 1D and 45.

Go back to {1CD}, load up exits again, and for Exit 0 (by this point you should have Total Exits 1, Exit 0 information being Source - 21 / 3C, destination {1F0 - Present}), type in Destination - X, 1D, Y, 45. Make sure to hit the up / down arrows near each coordinate to make sure Temporal Flux remembers them (just hit it up and back down to return it), and then Write to Memory and Save. Your location data should summarily look like this: 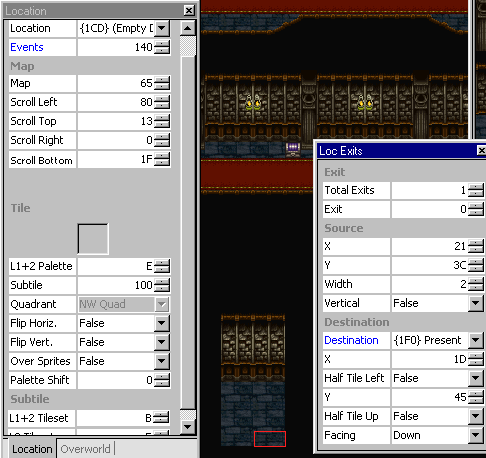 Okay! So we can get back to the Overworld, but we can't actually get to the new location yet. This will be easy; just load up the Overworld, and go to Window > Overworld Exits and Map > Exits. In OW Exits, you'll notice it says that Total Exits equal 50. Bump that up to 51, and a red square should appear on the very left side of the map, near the middle. This is the exit you just created by bringing the total amount up to 51, and this exit is thus number 50. So, go up to Exit 50, and move it around under Source until it encompasses the doorstep of the house. For name, we can use the default Cathedral tag, and for Available, check Yes, or otherwise it won't show up. Let's move on to the Destination box; this will determine where the exit takes you. In Destination, put {1CD} Empty Area. For X and Y, recall earlier where we put the exit to the Overworld. We don't want to start the player on that exit, so let's have him load a little to the left -- tiles X - 20, Y - 3C should work for the coordinates. 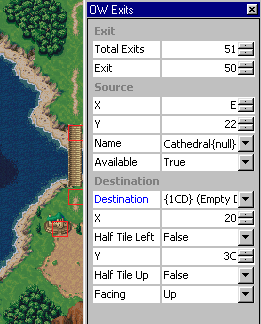 Note that the exit currently won't work like this. For TF versions 1.x, you have to experiment around with it. 2.0 and later versions fix this problem. We aren't finished yet, however.

If you were to load up the game right now, you would find that you can walk straight through the new house and not even access the exit you just created. This is because

Go to Layer 2, with Exits still shown on the map, and put the grass tile 65 on the Exit (if you can't find it in the tileset, just righit click grass tiles until you see "65" pop up in Tile on the regular Overworld info sidebar). Now write to memory and save. The house will now be solid! Next, we need to make sure the tile beneath the exit partly supports exits. I'm not sure if sand does, but grass tile 45 is walkable and does allow exits to be placed on it. Thus, make the tile below the house in Layer 2 grass tile 45.