In April 2011, Licawolf presented a beautiful concept for a Chronopolis alternate reality game, complete with several images of the access website and special logos. The original thread can be found here. The concept's being presented as a feature thanks to just how exciting and well made it is! Check it out!

This is just an idea for a game I’m sharing here accompanied with pretty fake screenshots, I don’t actually intend to make it real Smile Think of this as a fanart-fanfic of sorts.

This idea was born some days ago in the middle of a creative block. I decided to play around with some web design ideas to see if I could get my creative juices flowing again. I started adding some Chrono flavored ideas to get me entertained, the result was a layout (and logo) design for a fictional “Chronopolis” website. I started thinking in which kind of game this could be actually used, which kind of game uses a fake website design?

After thinking a little about it the idea hit: an ARG!

From the wikipedia article:

An alternate reality game (ARG) is an interactive narrative that uses the real world as a platform, often involving multiple media and game elements, to tell a story that may be affected by participants' ideas or actions.

The form is defined by intense player involvement with a story that takes place in real-time and evolves according to participants' responses, and characters that are actively controlled by the game's designers, as opposed to being controlled by artificial intelligence as in a computer or console video game. Players interact directly with characters in the game, solve plot-based challenges and puzzles, and often work together with a community to analyze the story and coordinate real-life and online activities. ARGs generally use multimedia, such as telephones, email and mail but rely on the Internet as the central binding medium.

Based on the Chronopolis website design, I came up with a simple idea for a Chrono ARG (heavily inspired by the LOST ARGs, particularly Dharma Wants You, and the fake Hanso Foundation websites from the LOST Experience).

The game follows Chronopolis pre-Time Crash, the people that worked there and the implementation of Project Kid. More especifically, a group of Chronopolis agents (the players) who were selected for missions related with Project Kid, but they slowly discover there is much more to the Project than what have been revealed to them.

The “rabbit hole”( the very first clue that brings people into the ARG) are these Chronopolis ID cards. 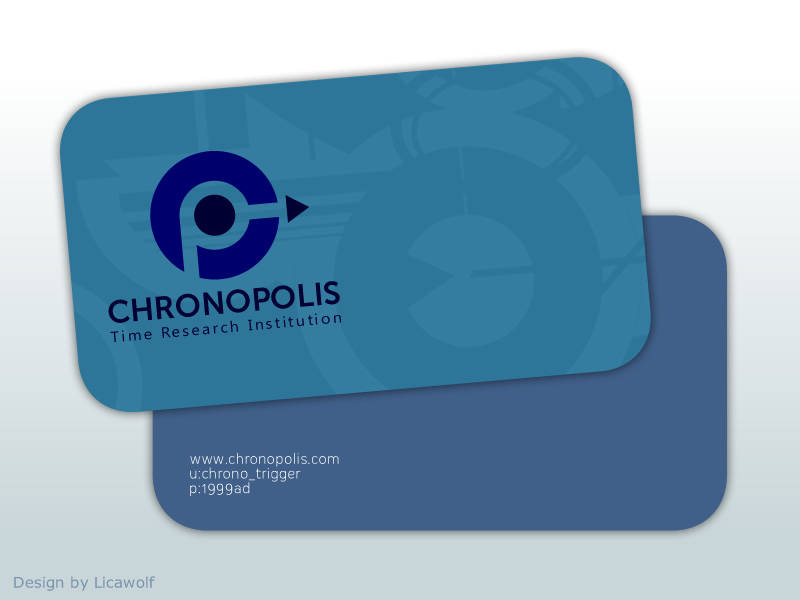 Let’s say, you are sent this mysterious card to your mail or given to you in a videogame store, it has the url of a website and a password printed in the back, without revealing anything else. 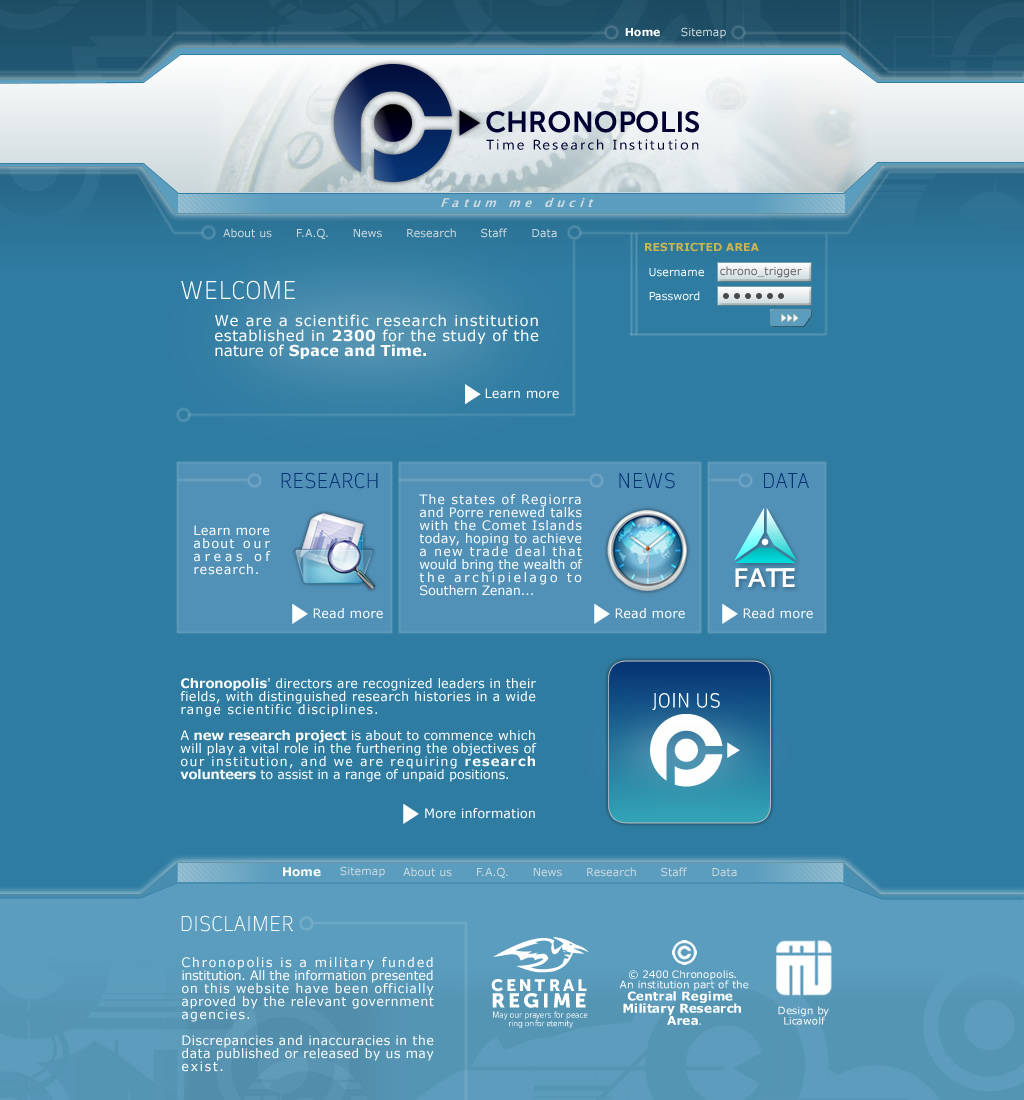 (The "Join us" button is an alternative way to get a password, if couldn't get a card IRL)

The website is fully functional, with all the subpages working, all of them with simple and not too revealing content, the typical information that is to be expected in a corporate website(Mission, vision, values...), just a bunch of ambigous information (to keep up appearances) 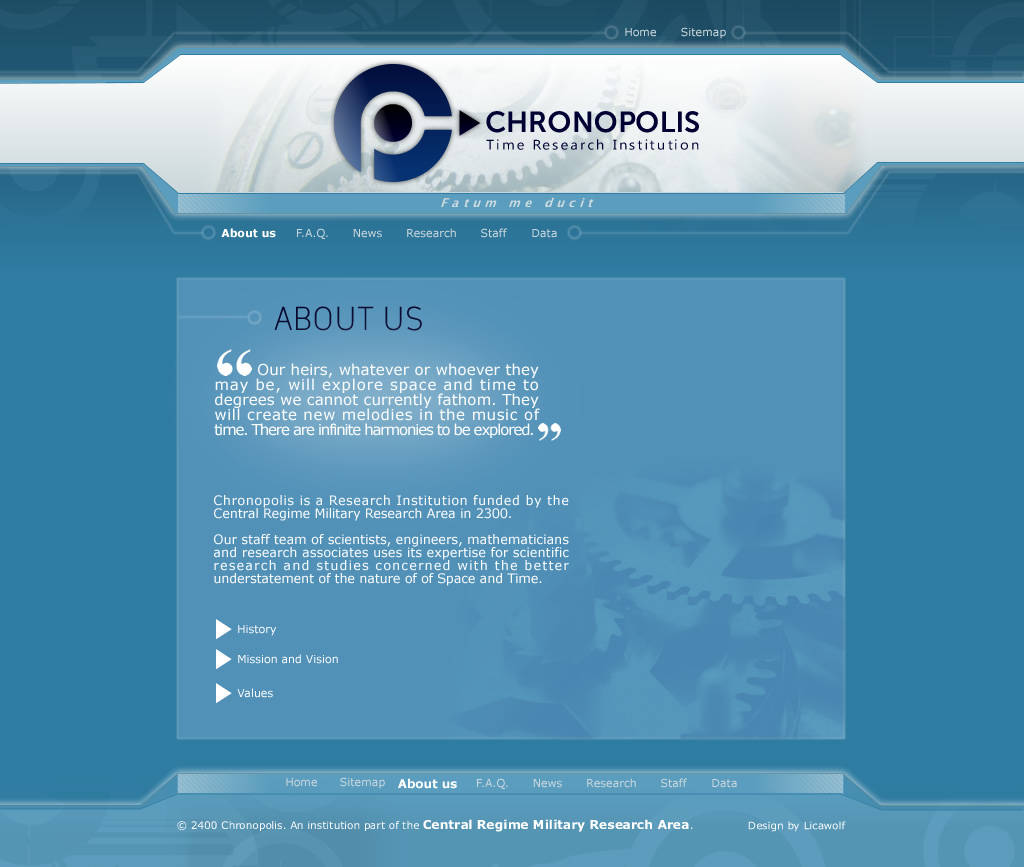 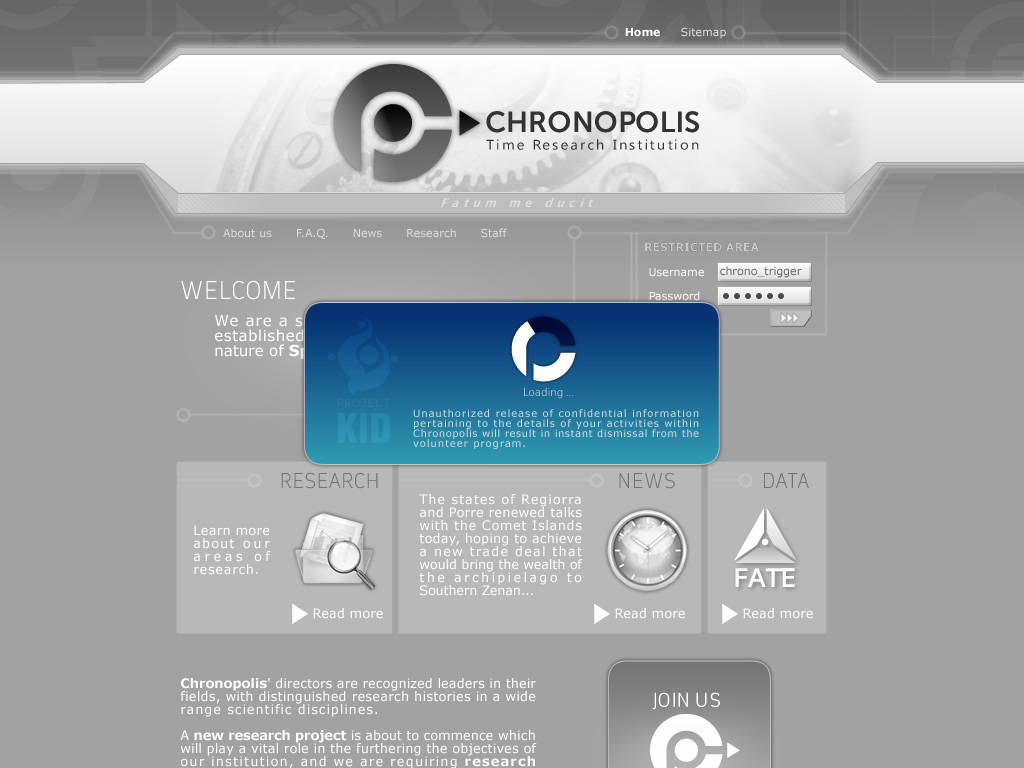 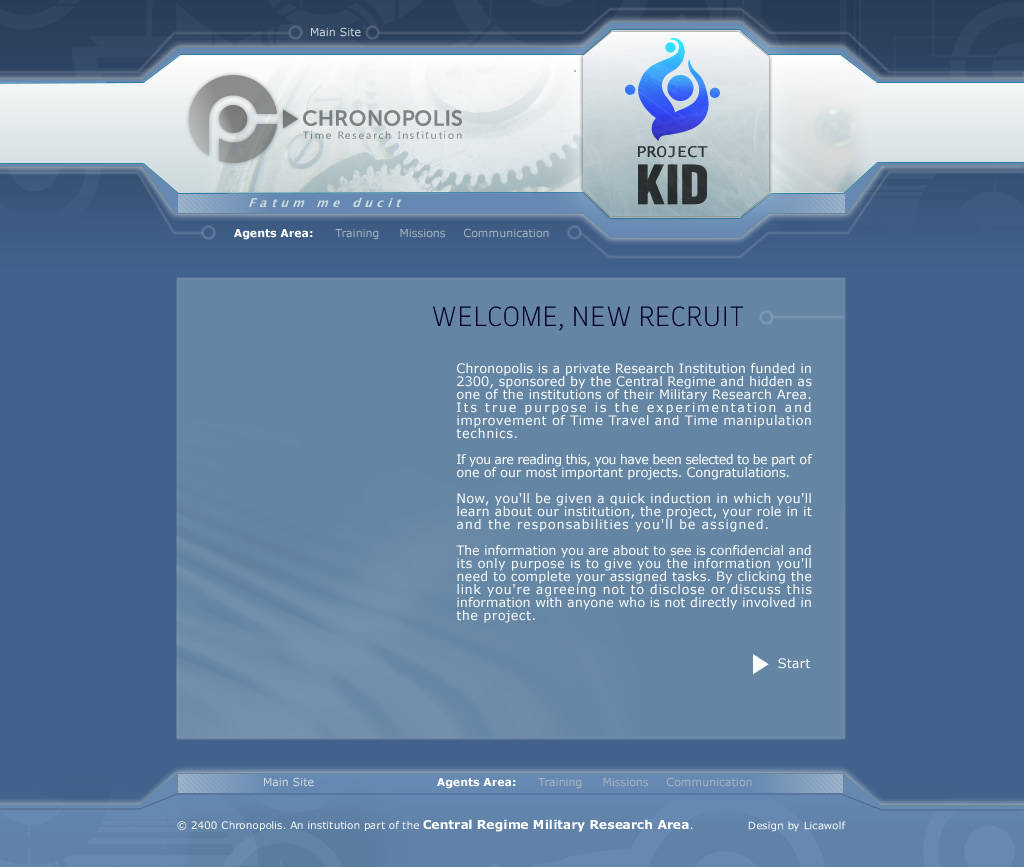 By registering on the Project Kid website, you can enroll as an agent of Chronopolis, and participate in weekly missions, with each succesful mission a new piece of the story behind the game will be revealed to you. 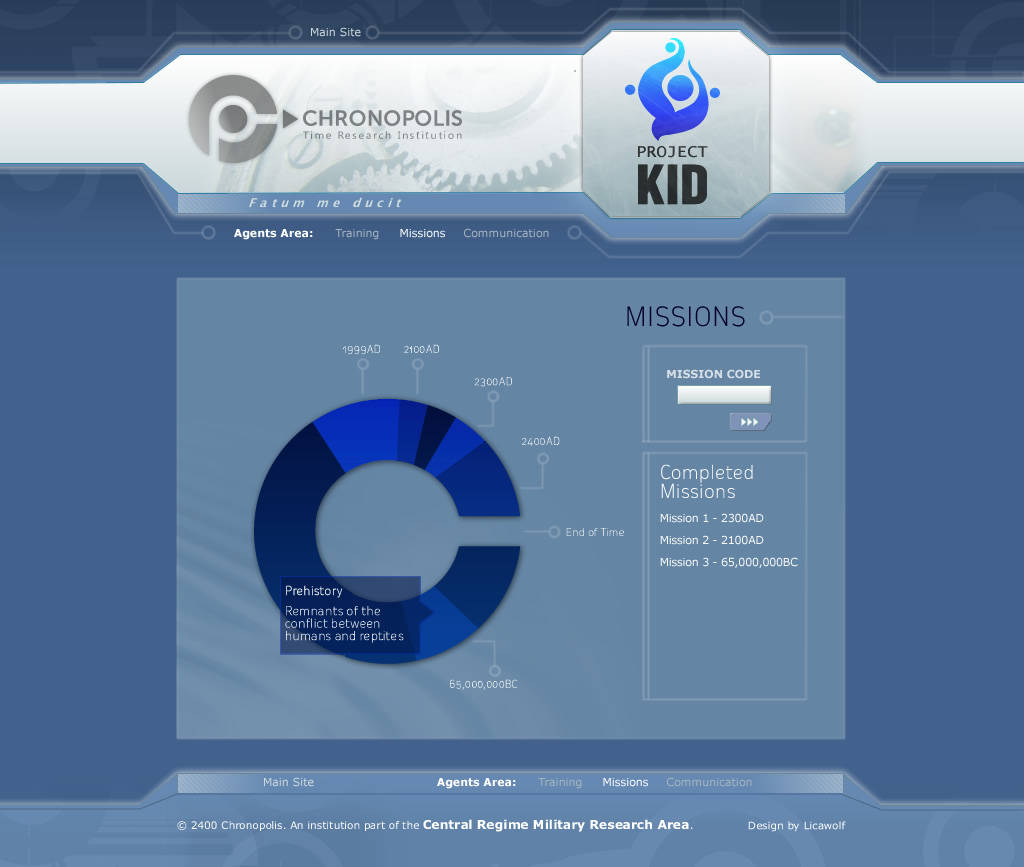 Missions are a mix of internet treasure-hunting and plot-based puzzles.... as an example: The Chief Director of Chronopolis send you an email containing a document, an essay of a paleontologist about hypothesis of the extinction of the Reptites. The essay doesn’t actually say anything relevant, the true clue is the name of the author of the essay, if you google it you’ll find a blog, allegedy created by this fictional author. A code may be hidden in one of its posts. If you enter the code in the “Mission code” field of the website you unlock a little puzzle or a minigame to be solved.

Another example, you are sent another email, it’s a long block of text, but you notice the words “Porrean” and “Hero” are marked. If you google them you’ll find a youtube channel called PorreanHero, despite the name, at first glance there’s nothing related to Chrono in the account. It only has one video, a home-made documentary about some paranormal theories proposing that there are real Time Travelers and that have affected real-world history. Maybe at one part of the video there is an odd date thrown in, and that’s the code.

It may sound too complicated, but the idea is that the missions should be solved as a community, not individually...and if players ever get stuck, there are always ways of helping them get back in track, anyway.

I had some other ideas like having some “spies” from the Central Regime posing as agents (acting as players) in the community, but I did not planned further than that...

For the curious, here are the logos used in the website, and an alternative version of Project Kid’s logo with Frozen Flame instead of the Chrono Cross.