In Chronopolis, a diagram supposedly depicting an Early Human and a Human is presented to contrast Lavos evolution. The alleged Early Human is shown with apelike features, even though Ayla is shown to be an upright homo sapiens in Chrono Trigger, along with her colleagues. What gives?

Chrono Cross establishes that early humans contacted the Frozen Flame around 3000000 B.C., and that Lavos evolved them to modern humans rapidly. These modern humans would later create the Kingdom of Zeal and modern civilization. The same quote that establishes the three-million year timeframe also speaks of the brains:

Masato Kato worked on Chrono Trigger and Chrono Cross at the deepest stages of its development, precluding the possibility of making a mistake simply by forgetting Ayla's concept art and the status of humans in 65000000 B.C. This is probably just an accident by the field artists for the maps of Chrono Cross, not caught by Kato or the other higher-ups. 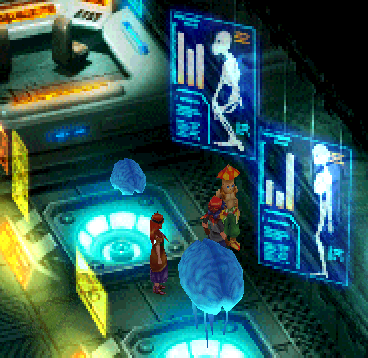