This page thanks to CuteLucca.

Download here. Be sure to check out the ~160 page Chrono Trigger OAV Manga as well!

According to Internet legend, "Nuumamonja" was released at a Japanese trade show to coincide with the official launch of Chrono Trigger. What we know is that it was released on a V-Jump 1996 video, where a fansubbing group (Hikari no Kiseki) got its hands on it and supplied it with English subtitles, it began making the rounds at anime cons in the US and gained a small bit of popularity. Here's the V-Jump '96 cover art (thanks to Carnivol):

Reaction to it is usually mixed; it doesn't feature any of the playable characters (except for a couple shots of the backs of Crono and Lucca's heads) and features NPCs instead, including Johnny the racing robot from 2300AD and Gato (aka Gonzales) from 1000AD. So a lot of people who go in expecting animated adventures featuring our heroes go away disappointed.

The actual stars are a Poyozo and a Nu who make up the musical group 'Nuumamonja'. The story follows a pretty nonsensical sequence of events as these two bungle their way through the Millenial Fair; there's really not much of a plot, climax, or resolution involved, making the whole thing feel a bit flat.

It DOES, however, have TONS of references to Chrono Trigger; every creature in the crowd is a monster you fight in-game. Masa and Mune's combined form competes in the drinking contest. Leene's bell rings to signal the opening of the fair. The music is also ripped directly from the game, so this may be either a good thing if you're a reminiscer, like me, or a bad thing, if you're hoping for instrumental versions of the game music.

Animation style is a bit low-quality, just typical Saturday morning stuff, and was probably handled by the same studio as did Dragon Ball, since Toriyama did character designs for both that and CT, and 'Nuumamonja' has that same light-hearted animation style.

So. You may like it, you may not. I think it's cute, but I would have preferred Square to have made a video featuring the main characters if they were going to bother making a film.

Total score: 3 out of 5. Main value lies in trying to recognize all the characters and in Gato, who is a freakin' badass. 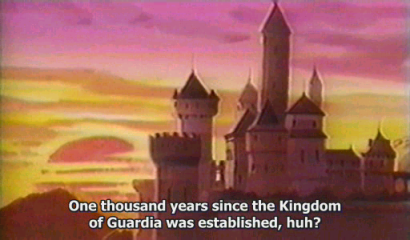 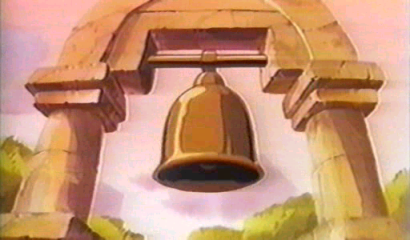 The story begins in the kingdom of Guardia as the citizens work together in brotherly love and harmony to set up for the Millenial Fair, which marks the 1000-year anniversary of the founding of the kingdom. The screen then fades to black and a strand of drool ticks back and forth, as you may recognize from the Chrono Trigger intro video. We zoom out and the drool belongs to a Nuu, who forms one half of the music/dance group Nuumamonja, the other half of which, an annoyingly sprightly Poyozo, twirls in from offscreen as the title comes up. 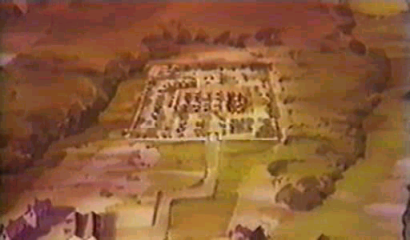 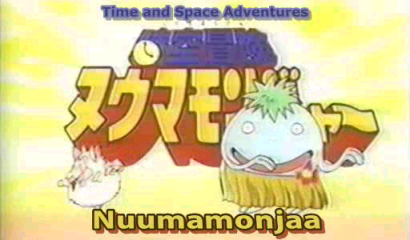 The alternate title is "Time and Space Adventures" which makes little to no sense since there is no time or space travel anywhere in this story; in fact, it takes place only at the millenial fair, and covers a span of just one night. So... 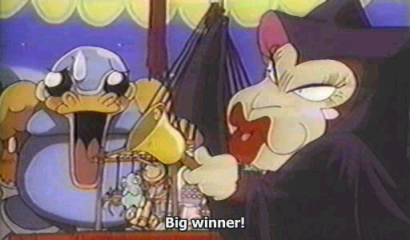 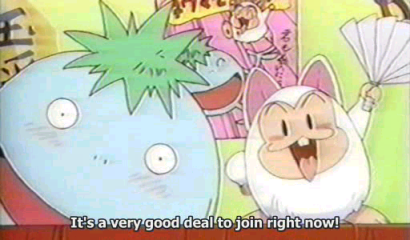 You'll quickly learn that Nu is the idiot of the pair; his voice is deep and slow, he relies on visual gags, and does pretty much what Poyozo tells him. Poyozo's the brains of the outfit (not really saying much, there) and is quick to anger, but she is a bit more entertaining than Nu.

Apparently, the Millenial fair opens late at night, when all the monsters from around the world get to go and enjoy the festivities before the stinky humans come in the next day.

Our heroes are there to set up a booth and recruit a new member to their group, accosting passers-by with promises of T-shirts, hats, and shovels, but have no success, and at the end of the day they retire to look through the rest of the fair. 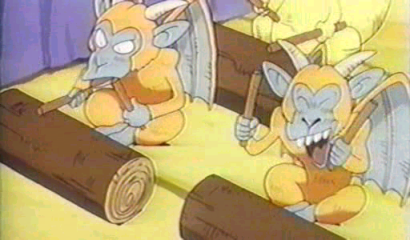 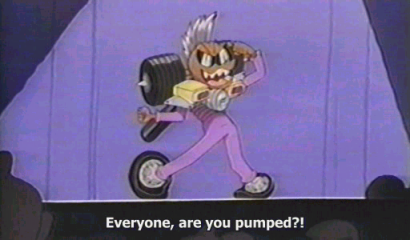 They soon come to the stage, where Johnny's doing his thing and pumping up the crowd for... something... in any case, he's pretty smooth, with all sorts of pelvic thrusts and English peppered through his Japanese.

On another note, what the hell is Johnny and his posse doing in 1000 AD anyway? He doesn't really have access to gates, or the desire to travel through them, or... bah, whatever.

In any case, here he is, and after he wows the crowd, Nu and Poyozo hop on stage and steal the spotlight (And Johnny's mufflers) thus pissing off the racing robot who chases them around for a while. 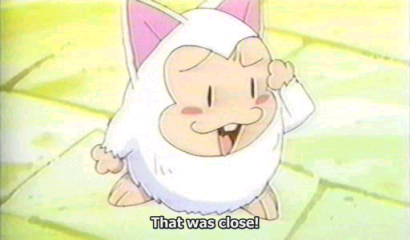 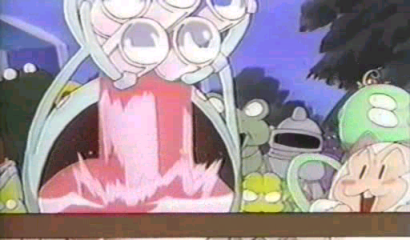 Somehow, they escape Johnny's pursuit, and as being chased is thirsty work, Poyozo spots the drinking contest and its prize of a GOLDEN SHOVEL (yay?) and commands Nu to go win it for her.

The first few rounds go by quickly, with Nu easily outdrinking his competitors (round 1 vs. an Alien enemy, round 2 vs. Masa and Mune's combined form) 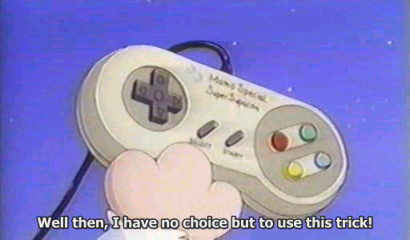 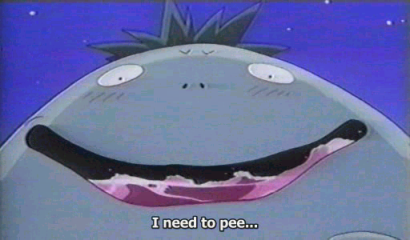 When he reaches round 3, vs. a Megasaur, Poyozo has to pull out the "Secret A-button barrage" attack and plugs an SNES controller into Nu's back, slamming the A-button and making Nu go all pac-man on the mugs of juice/beer/human blood.

In the end, Nu wins, Poyozo gets her GOLDEN SHOVEL, and everyone goes home happy. Sorta.

Understandably, Nu has to pee after consuming several dozen gallons of whatever it was, and he retreats into the bushes to empty his load, accompanied by the sound effect of a rushing waterfall. 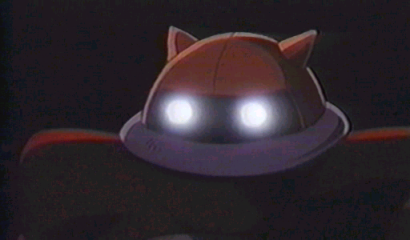 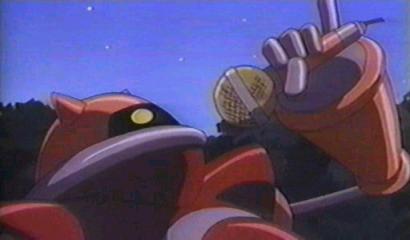 Here's where things get interesting. Nu inadvertantly pisses on Gato (Gonzales in Japan) who springs to life and starts his song, which he'll be singing incessantly for the rest of the film. It's actually far less annoying than it sounds, and Gato's actually super-badass and is easily my favorite character in the show.

He does, however, have an issue with running out of power and freezing in place, which he does mere moments after confronting Nu and Poyozo, who seize the opportunity to draw all over him in magic marker. "These guys just fall one at a time to the might of the Nuumamonja!" 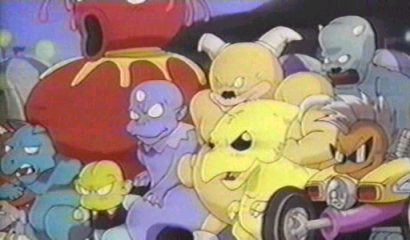 Gato quickly wakes up again and is understandably peeved with the Nuumamonja, so he chases them off a cliff, and all three of them land in a fountain which again, quickly shorts out Gato's circuits. (And yes, he IS singing the entire time, until he shorts out.)

Nu and Poyozo, those delightful little scamps, crawl up on his shoulders and start mocking him, and Poyozo flings her GOLDEN SHOVEL at his head. By a twist of fate, the shovel falls with one end in the water and the other touching an exposed wire on Gato's foot, and the current is bridged and he gets a second jolt, this time enough to stir him to SUPER-POWERED LIFE and he takes off running with the pair holding on for dear life, his singing now degenerated into shouting his lines at the top of his lungs. ...if robots HAD lungs.

Meanwhile, the main event of the Millenial fair is about to start, a thrilling 'race around the plaza.' Competing, of course, is Johnny and a slew of other recognizeable CT monsters, including imps, gargoyles, mutants, and henches. 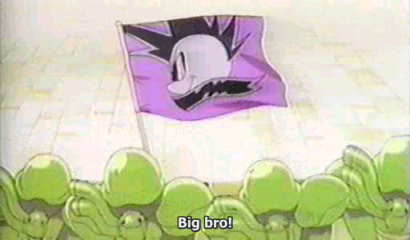 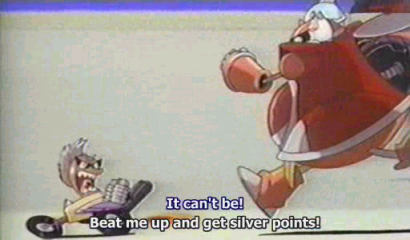 Johnny's fanclub is there to cheer him on, even though it seems uneccesary as he blows past the competition within the first few seconds of the race.

Gato, however, is still on a rampage and leaps out of the forest and onto the track, where he shoots by Johnny in about three seconds. Johnny's pissed again, while Nu and Poyozo have settled in and are quite happy in first place on Gato's shoulders. Johnny employs his boost and shoots past them once more, which turns out to be a bad idea since Gato then starts kicking him down the track with every step. 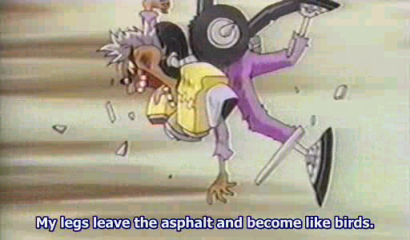 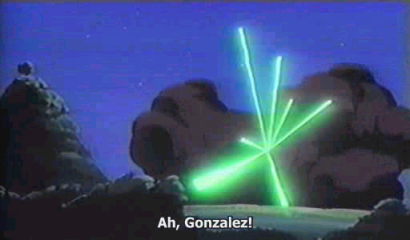 Johnny panics when he realizes that Gato's about to kick him into the wall, and begs Nu and Poyozo to somehow stop Gato. Fortunately, Gato's got a nice big skull-and-crossbones marked button on his back, which Nu eventually pushes, causing Gato to screech to a halt and shoot a boxing glove on a spring from his stomach.

The glove slams into Johnny, who crashes into the wall reciting poetry.

Fade out and in again on Poyozo and Nu, sitting together in the dark on the road outside of town. "What happened to the Gonzales robot?" Poyozo asks. On cue, explosions go off in the distance, Gato's singing rolling over the hills. 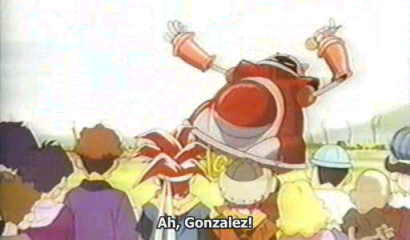 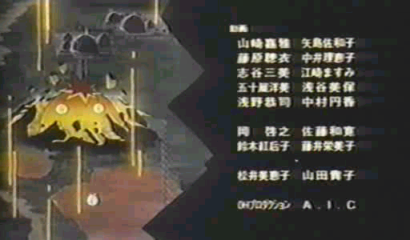 The next morning, we're at the Millenial Fair again, this time with humans, and we get our one glance at the backs of Crono and Lucca's heads as they watch Gato's routine. He's pretty understandably tired and falls over, his song slowly dying as Nuumamonja run by once more.

Actually, the credits are pretty cool, as they show Nu and Poyozo acting out scenes from the game and assuming the spots of other characters. You can see Nu as Lavos above, and Nu as the statue on Magus' castle below. There are about four other scenes that show during the credits. 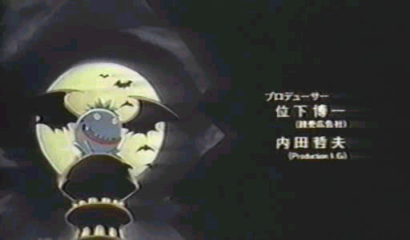 It's worth watching once, at least, as there's some decent jokes and, I mean... it's a Chrono Trigger movie. It's required viewing if you consider yourself a fan.

So where can you find it? There are no legally released copies, so your best bet is to look up the Hikari no Kiseki translation via any file-sharing program such as Kazaa or Bittorrent via Suprnova. Do a search for "Chrono Trigger OAV" and you should get a few results; it's relatively common.