Chrono Cross was given presentations at several trade shows and in several magazines. This page will also archive print coverage of Chrono Cross in particular. 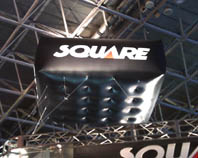 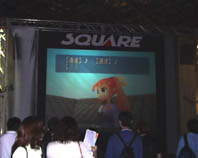 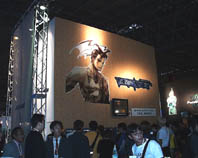 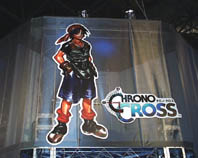 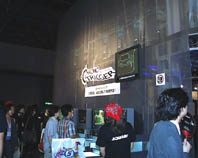 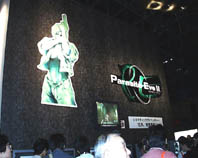 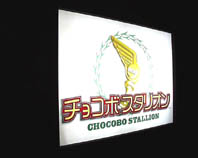 A preview leaflet. All we have so far are these Twitter pictures.

The text plugs Chrono Trigger's prior achievements and the addition of cutscenes to the Playstation version. The Chrono Cross blurb outlines some vague details about the plot; nothing new. The back cover notes that the preorder bonus is the clock.

Responsible for polygon characters in battle scenes centered on monsters. His technique is easy to understand for bosses. In particular, fights and the like were (at that time) so confident that they were "the workmanship of the industry."

Responsible for the overall background of the battle scene. He handles about 60% of the entire background, including modeling and exercises related to the background. He also worked on the title-back undersea scene above.

This disc has been recovered and dumped, and is roughly 539 MB. It contains some art for: 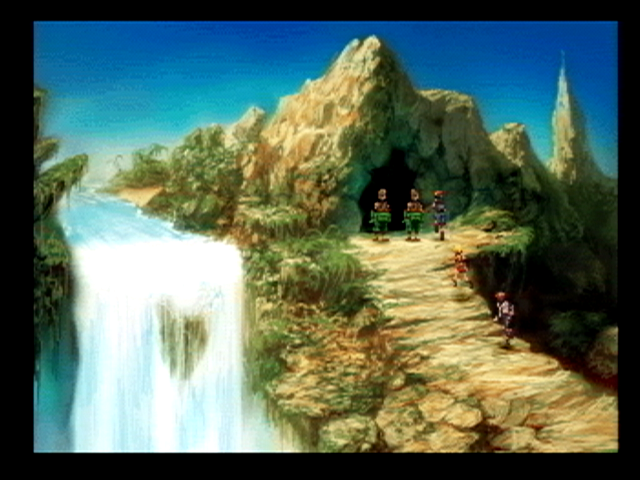 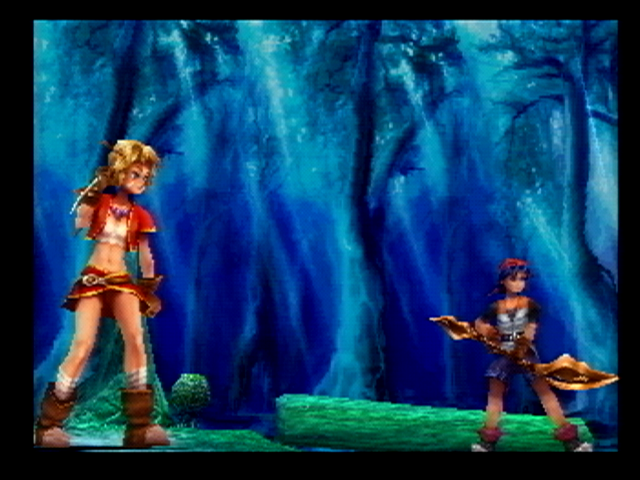 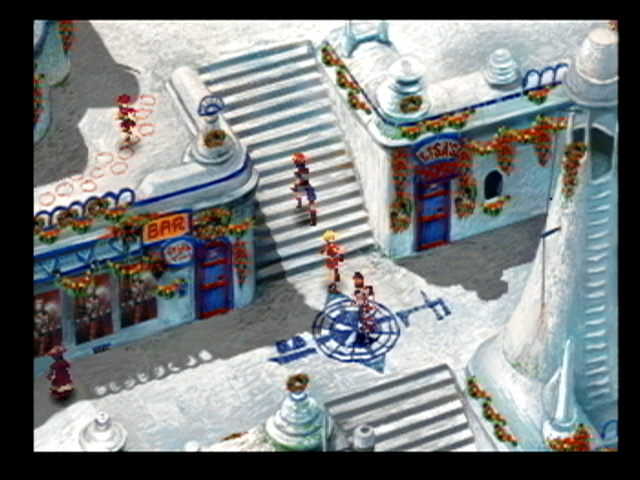 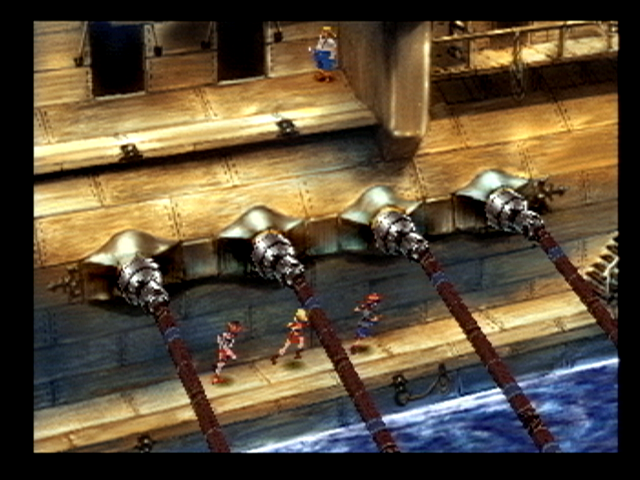 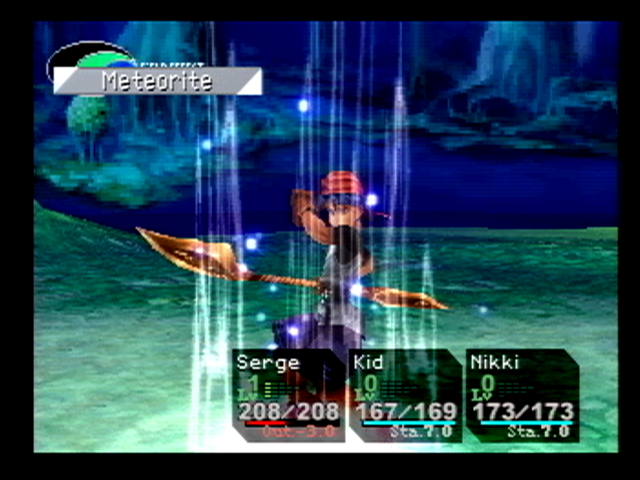 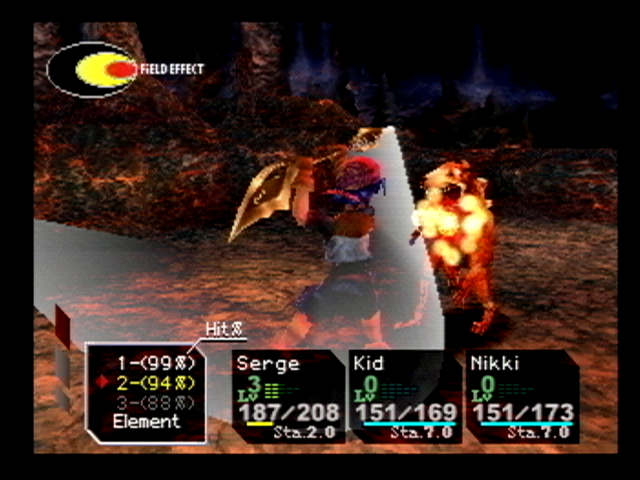 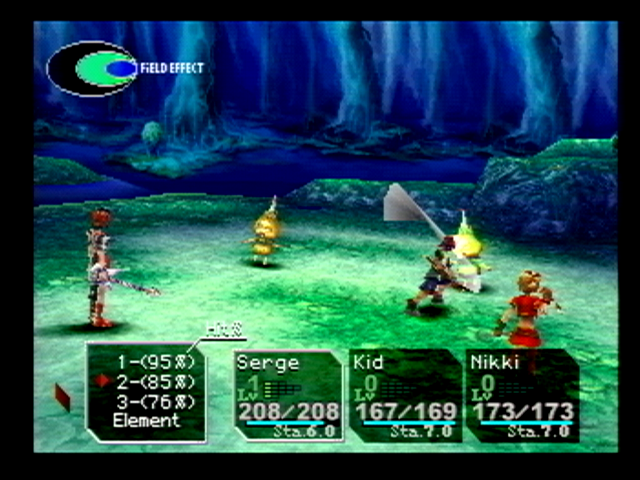 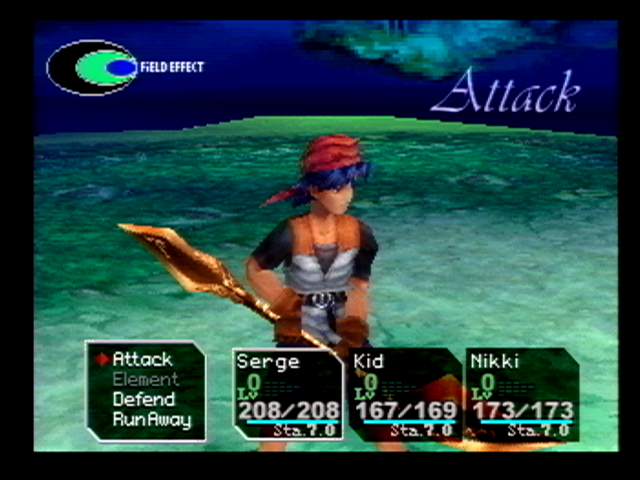 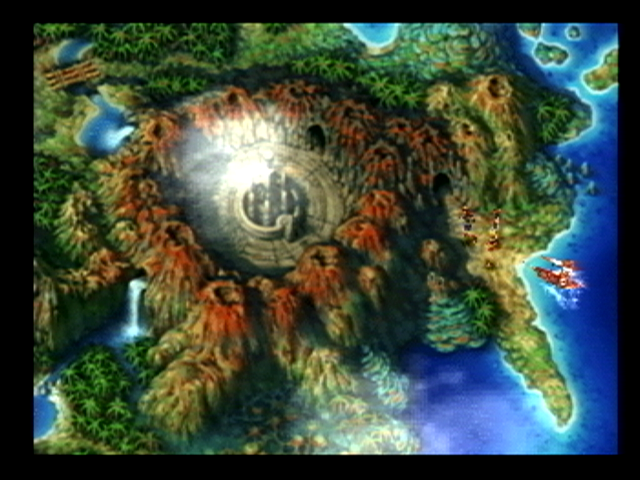 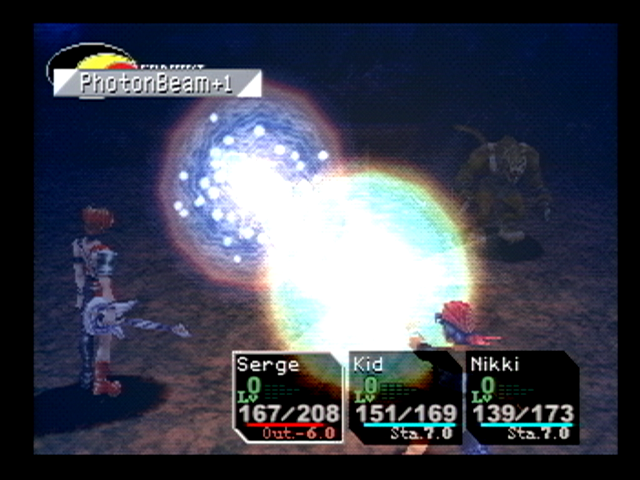 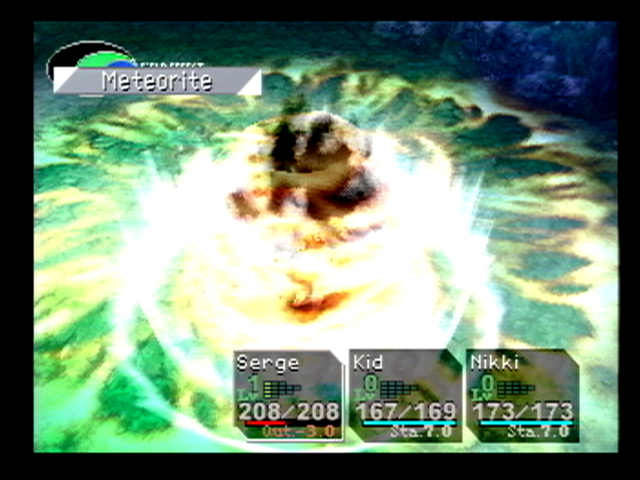 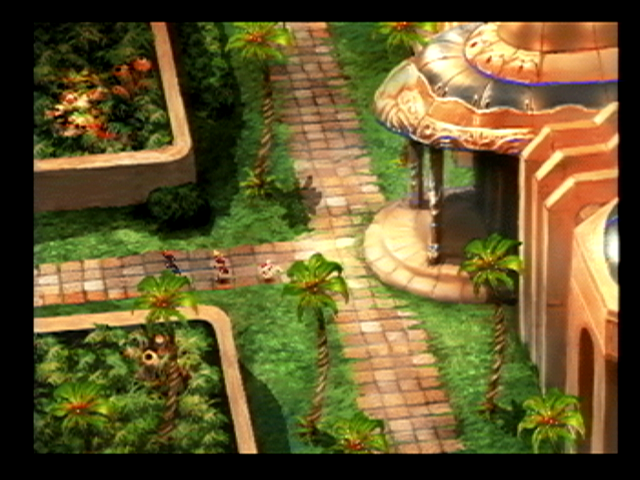 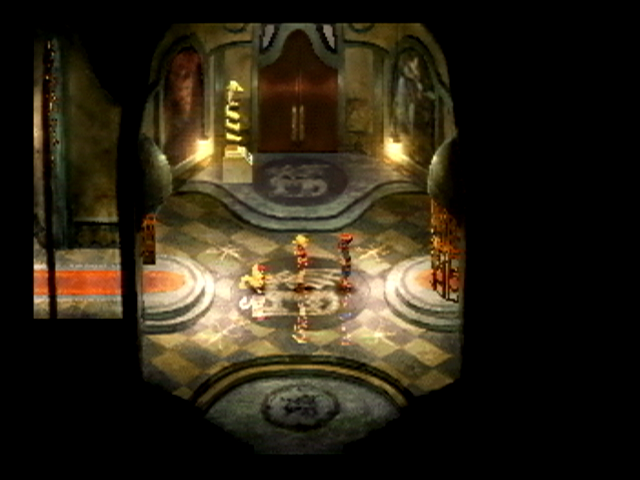 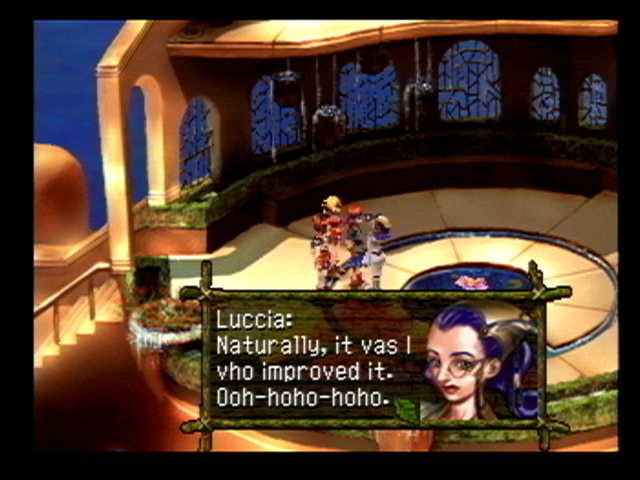 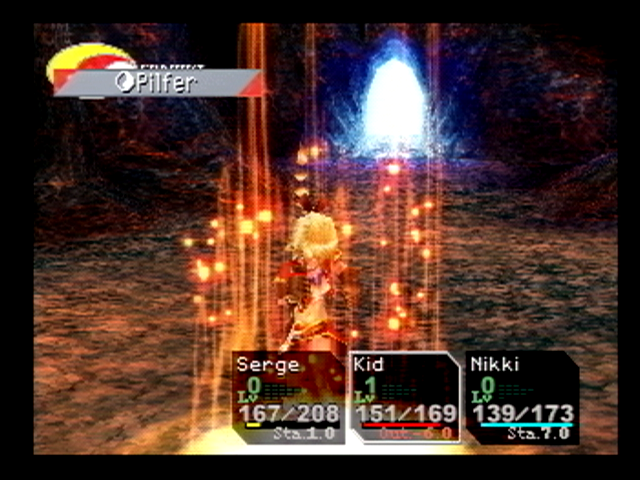 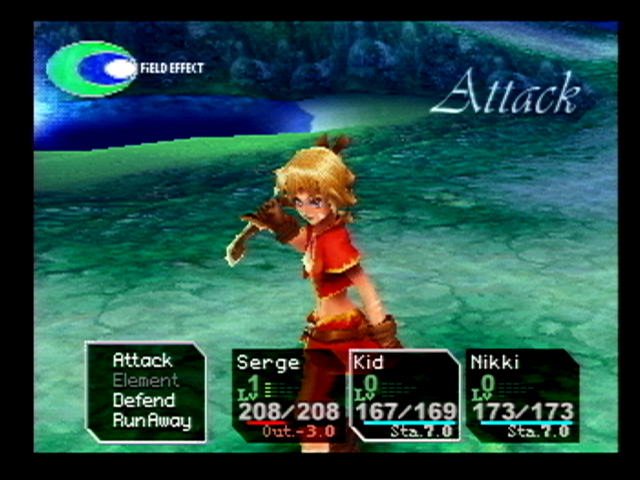 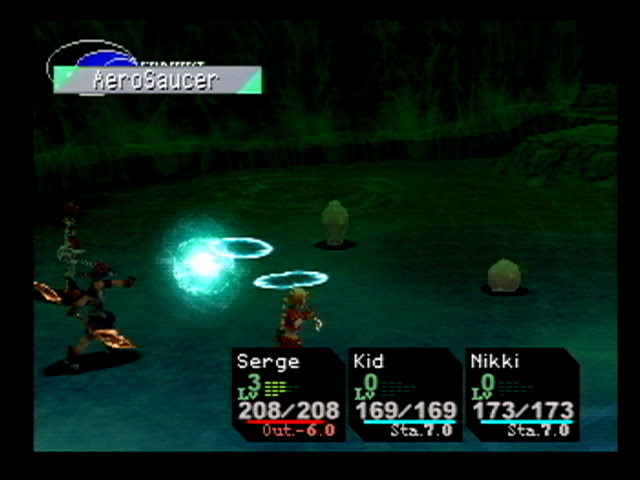 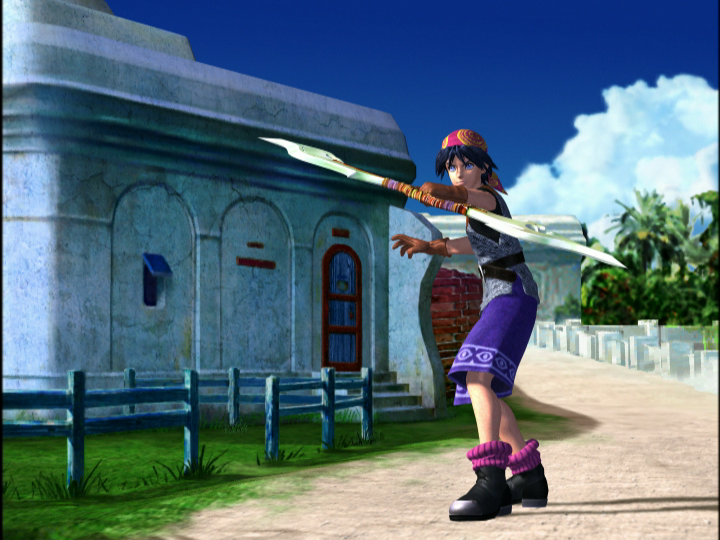 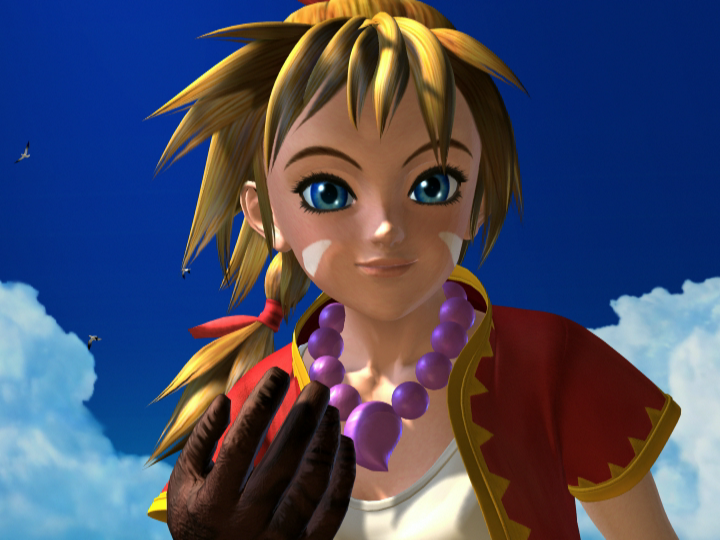 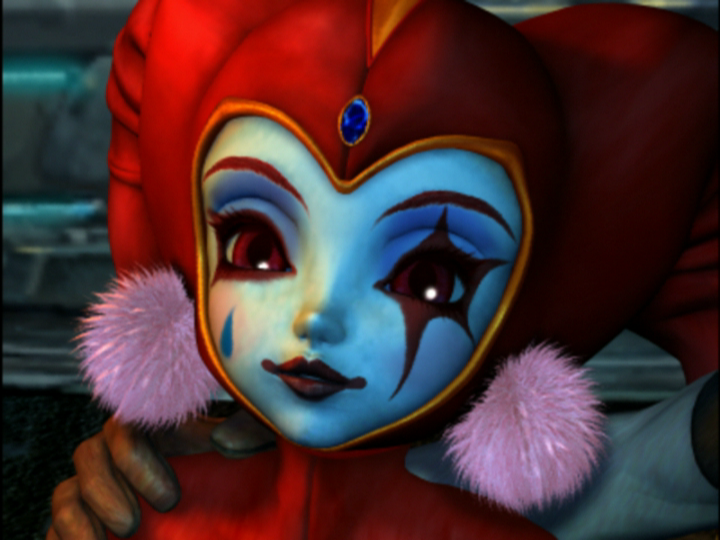 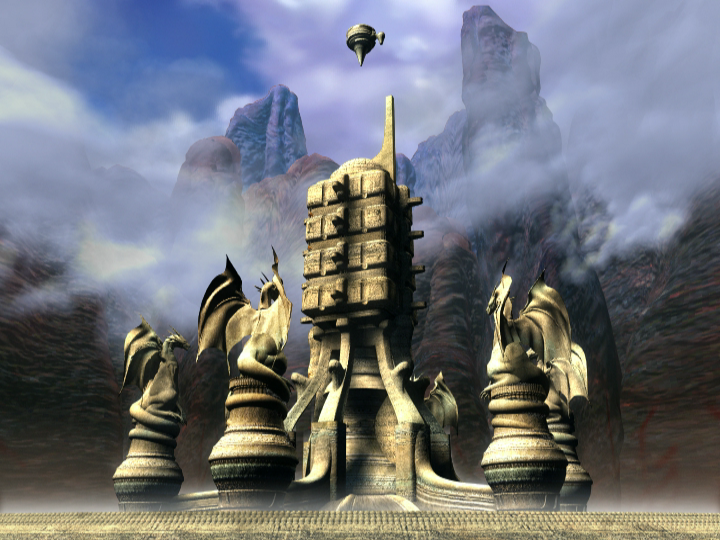 
COSTA MESA, Calif., May 2, 2000 - Square Electronic Arts L.L.C. (Square Electronic Arts), the exclusive publisher of all SQUARESOFT® products in North America, today announced the titles it will debut at the Electronic Entertainment Expo (E3) to be held May 11-13, 2000 in Los Angeles, California. Square's product lineup consists of two titles for the PlayStation 2 computer entertainment system, including The Bouncer™, an action fighting game and Driving Emotion Type-S™, a driving simulation game. Square will also offer a preview of FINAL FANTASY IX for the PlayStation® game console. FINAL FANTASY IX is the latest title in the popular FINAL FANTASY series, which has sold more than 26 million units to date.

In addition to FINAL FANTASY IX, Square will present a variety of role-playing games (RPGs) for the PlayStation game console that range from the traditional RPG style that Square has become famous for to more action-oriented games that will appeal to casual gamers. Among these are two sequels to past hits, Chrono Cross™ and Parasite Eve™ 2, and a new medieval action/adventure title, Vagrant Story™.

The following PlayStation 2 titles will be showcased:

THE BOUNCER - A "Seamless Action Battle" where fighting elements combine with life-like action allowing multiple players and multiple enemies to fight simultaneously - a feature never before seen in a video game. New and dynamic developmental features allow interactivity with the environment like tables, chairs, and debris where action battles take place involving as many as 10 characters at once. Character designs by famed FINAL FANTASY and Parasite Eve artist Tetsuya Nomura bring an amazingly life-like look and feel to characters in this "Playing Action Movie." The Bouncer is scheduled to ship in late 2000.

DRIVING EMOTION TYPE-S - A driving simulation game implementing a number of innovative features not found in typical racing games. Featuring a superior engine that accurately simulates the physics of driving, every detail such as air, weight, gravity and resistance is systematically calculated to give gamers a true feel of driving at high speeds. To add even more realism to the game, Driving Emotion Type-S features a new driving perspective that allows gamers to experience driving from inside the car. Ultimately, this translates to having an up close look at every minute detail of a car's interior, and a driving experience like no other. The title will ship in 2001.

The following PlayStation titles will also be on display:

VAGRANT STORY - An action/role-playing game set in a medieval world where the player takes the role of a knight who has been wrongly accused of murder and must flee into hiding to uncover the truth. The game features a unique weapon system in which players can create their own armaments from various pieces of weapons they find throughout the game. Vagrant Story offers breathtaking cinematic sequences accompanied by movie-style gameplay features such as innovative lighting and editing effects. Vagrant Story is scheduled to ship on May 16, 2000 packaged with a demo disc - 2000 collector's CD Vol. 3 -including interactive and non-interactive demos of other Square titles including Chocobo Racing™, Chocobo's Dungeon™ 2, SaGa Frontier™ 2, Front Mission 3™, Legend of Mana™, Chrono Cross™ and Threads of Fate™.

LEGEND OF MANA - A role-playing game set in a magical, fairy-tale world and depicted in brilliant 2D watercolor graphics. Players assume the role of one of two playable characters and embark on a quest to restore the world of Fa'Diel. They do so by using the "Land Creation System" that employs artifacts received throughout the game to create the individual lands. As players expand the world, they must also face a variety of monsters and level bosses. Legend of Mana is slated to ship June 13, 2000.

THREADS OF FATE - A role-playing game with a deep storyline and thrilling action and puzzle elements. Players can choose between two characters who are both trying to obtain the Dew Prism, an artifact that has the power to reshape reality. In the search for this artifact, players travel through the game's eight levels and use their character's special powers to battle powerful enemies. Players can kick and punch during attacks providing non-stop action and a reliance on quick reflexes. Threads of Fate is scheduled to ship July 18, 2000.

CHRONO CROSS - A role-playing game and follow up to the popular Chrono Trigger in which the two main characters face a strange evil presence that threatens the universe. Their only hope in eliminating it lies in a secret and powerful artifact which they set out to find. Players utilize a battle system that offers real-time fighting sequences for uninterrupted battle and flexible fighting options. The game also features high-quality full motion video sequences created by the same team that created the sequences for FINAL FANTASY VIII. Chrono Cross is scheduled to ship in August 2000.

PARASITE EVE 2 - A sequel to the best-selling role-playing adventure game, Parasite Eve 2 again places the player in the role of Aya Brea, a policewoman from New York. A new breed of monsters has emerged and Aya must fight the spread of the creatures. Players collect and customize a wide variety of weapons and armor as they progress through the game. Realistic computer generated cinematic sequences transition fluidly in and out of the gameplay. Parasite Eve 2 is slated to ship in September 2000.

FINAL FANTASY IX - The latest in Square's world-renowned FINAL FANTASY franchise, FINAL FANTASY IX allows gamers to return to roots of the franchise's success. The title plays out in a classic FINAL FANTASY medieval setting with the return of staple characters largely enhanced by beautifully animated computer generated graphics. Famed artist, Yoshitaka Amano, works on FINAL FANTASY IX as character designer and the image illustrator. With vast artistic, creative and developmental talents involved in the project, the last FINAL FANTASY game on the PlayStation game console is sure to inspire more audiences than even previous versions. FINAL FANTASY IX is set to ship in late 2000.

Square Co., Ltd. is the leading third-party developer and publisher of home video game console software in Japan with annual sales of more than US $345 million and 1,200 employees worldwide. Square Co., Ltd. became famous for its role playing games, including its world-renowned Final Fantasy series, which has sold more than 26 million units to date, and now publishes other titles under the SQUARESOFT brand spanning all genres. Square Co., Ltd. is based in Tokyo, Japan, and maintains a branch office in Osaka. More information about Square Co., Ltd., can be found on the Internet at http://www.square.co.jp.

>Prior to FFIX, our company launched "Seiken Densetsu: Legend of Mana" in July last year and "Chrono Cross" in November with a winning attitude. Both of these titles could have shipped over one million units, but by the end of March 2000, they had sold only 730,000 and 750,000 units respectively.