File 2535 defines the characteristics of enemies. Each enemy definition is 176 (0xb0) bytes long.

Here's what I found testing Beach Bums at Cape Howl.

The next time in the game you have a solo character is as Lynx in the Temporal Vortex, but you recruit Sprigg before any battles, so that was a bust.

The only other scenario I could think of is in Lucca's orphanage since your party gradually decreases as you work your way through the house. This is what I found there: Lava-boys (and girls) - these have a random sex, so they'll get +/- 5% HP depending on Male or Female. My calculations account for the bonus in order to better match the stat block on disc.

That's the regular value on disc for that encounter, so I don't think scaling is used after you recruit your first character, regardless how many are actually in your current party, and it seems like it has nothing to do with star level. At zero stars if you recruit Poshul, enemy HP will be normal.

There is another factor though, that you noticed Grobycftw, NG+ enemies will have 2x HP. It looks like this is a separate scaling factor that is applied alongside the early game difficulty scaling. I tested this in a NG+ game and enemies had the normal HP, until I recruited a character, and then they had 2x.

Here's my hunch about the way it's calculated, order of operations:

The order of operations does seem to matter here, since a shift down or divide with integers could clear the low bit before shifting back up (in the case of NG+ and early game). However it doesn't seem to matter since no enemies in the beginning have stat blocks with odd values. The 5% definitely happens after the scaling though, as it is testable (male Beach Bums have 67 HP, not 66 in NG+).

I'm tempted to try and dump emu states before and after recruiting Poshul to see if I can find where that value gets set, but feeling a bit lazy at the moment.

First thing to look at is if HP is actually used as a signed integer. I would've thought that the game logic would just check for underflow (HP after damage greater than initial HP), and set to zero, but it's also possible that they would use a signed data type and just check for a less than zero value, since there are cases where damage actually does heal (plate armor stolen from dragons).

(I'll list my disc modifications based on a 2352 sector size, and using disc 1 only)

Next I modified Aquabeam so that it does zero damage but shows enemy HP:

And last, I changed Tablet, so that it targets enemies:

Next I used a Tablet on him, which did... something odd. He sagged like he was close to death. And when I checked his HP it was far outside the 16bit boundary: 934,557/32,767 (and colored red like low HP). A single 1 stamina attack then killed it  :shock: So it seems like the game doesn't display negative HP values properly, but it sure acted like one. This makes me think that HP, while not explicitly signed, is contingent on some game logic that treats it as such, but isn't well enforced.

I also double checked that an enemy with a reasonable HP value, when healed, doesn't go above it's max HP. It seems like this overflow is only possible during the heal calculation if the result is lower than the max HP because of the sign change.

The last thing to note, giving an enemy a default HP value of 32768, made it's max HP overflow too, which creates some odd interactions. This seems like a bug in the game logic. It might be possible to fix the damage formula to allow for full 16bit values, but that'll take someone with more experience than me. In the meantime, probably best to only use HP values under 32,767. Or, if you are planning on having a mod that can be played in NG+, 16,383. 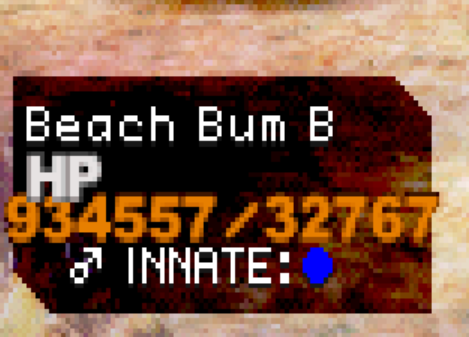