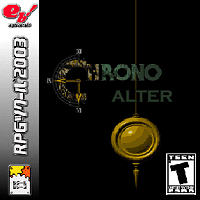 In preparation for the release of Chrono Alter we conducted an interview with project creator LanceVII. You can download this RPGMaker game at its RPGMaker release site, which also links to screencaps and video footage. If you've been thirsting for more playable Chrono goodness, check it out!

1. This isn't the first time you've completed a Chrono Trigger fangame, right? Can you tell us a little about Chrono Chronicles, and why you decided to create Chrono Alter after its release?

Chrono Chronicles was a very amateur attempt at making a a Chrono/RPG Maker game. It was very short, and did not recognize Cross as canon, and branched off into its own little thing. It used the same engine, but it used graphics that came preloaded with RPG Maker 2003. The game turned out rather ugly in my honest opinion. Somehow, people noticed it, and took a liking to it. I personally didn't understand it, but I still enjoyed the minor success it was. It still remains on RPGMaker.net as a 4/5 rating, and over 4000 downloads.

A year after its release, two notable events happened that led to the creation of Chrono Alter. One, a user named Miksy91 did half of a video walkthrough of the game on Youtube. After watching my work, I began to think about a remake of the game with an extended story, better graphics, and some other neat features. I felt the tale really deserved a retelling.

After that, I got a message from a user named KirkAyask saying that he was making a remake of Chrono Chronicles called Chrono Crystal. After watching the first five minutes of his remake, I told him I would think about allowing him to continue. After a lot of thinking and brainstorming, I decided I was going to make RE: Chrono Chronicles myself. I sent him a message telling him that I was going to remake the game, and I would like to have him on my team during production. Sadly, he declined.

Soon after starting production, the game started to shape into a re-imagining of Chronicles, or a reboot. At that point, I began to think the game deserved a different title. I began looking at latin words I might use, and the word "Alter" came to mind. It means "Another." In the game, "Chrono Alter" is a place, roughly meaning "Another Time." 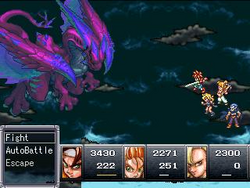 2. Can you give us a run-down of the basic scenario Chrono Alter portrays? How does it relate to Chrono canon?

Chrono Alter is a direct sequel to Chrono Trigger, taking place one year after the defeat of Lavos. This game is a sequel to the SNES edition of Trigger, and therefore, Crono and Marle aren't married yet, the Dream Devourer hasn't been born, etc. It begins with Crono and Marle on a very important date, in which Crono plans to propose. During their date, they are attacked by what appears to be Lavos resurrected. Lavos defeats Crono, and pulls Crono and Marle into a new world. Crono wakes up alone, and begins his exploration. He discovers Schala is here as well, and after meeting up with Glenn, begins his search for Marle and Schala.

Meanwhile, in 1001 A.D., Lucca becomes worried about her two friends, and begins searching for them across time. So, you'll be playing as Lucca for a couple of sections of the game in different time periods. Eventually, the stories merge, and the team is reunited.

As far as canon goes, I decided it should begin a lead into Cross this time. The theme of the game is Schala's whereabouts, and how she gets merged to Lavos, and where Dalton ended up after his battle with the CT team in Trigger. It sets up Cross, but not too much. There's room for one more game in between Alter and Cross. There's that much story left. 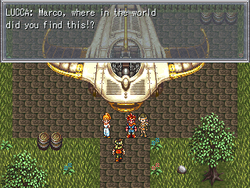 3. Is Chrono Alter a one-man project or did you assemble a team/get significant help from fellow fans along the way? About how long did the development process take, if you had to give an estimate?

Chrono Alter is definitely a team effort. It's not a big team, and most of the work was done by me, but I still had a good team behind me that definitely improved nearly all aspects of the game. I got a lot of help from websites, such as rpgmaker.net, charas-project.net, and vgmusic.com. They've been a huge help.

As for specific people. Kholdstare89 has been my right hand man in all of the project. He's helped with editing, script, beta testing, and graphics formatting. The logo for the game was made by him. He kept egging me to finish the game, constantly telling me "You have fans, Lance. Don't let them down." Another huge help was my girlfriend, Chelsea. She did some beta testing, and some minor character design. She and Khold helped me with the spell-check process. Jaymonious did a fantastic job on the battle animations. Check out his Youtube for his RPG Maker games! Tssf gave me some music, and he arranged the game's final battle theme. When you guys hear the final battle music, please go to his Youtube and tell him you loved the song in Chrono Alter.

Development started around the beginning of Summer 2009, originally projected for an October release. It's been a little under a year, I'd say. 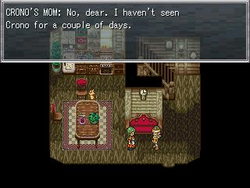 4. I remember toying around with RPGMaker about a decade ago and being so disappointed with the first-person view battle system it had by default back then. Judging from Chrono Alter, it looks like RPGMaker can take advantage of Final Fantasy VI-style gameplay systems now. Did you have to create any customized scripts to implement gameplay features, or are advanced features pretty easy for RPGMaker beginners to pick up and start designing games with nowadays?

RPG Maker 2003 is, for the most part, the Final Fantasy VI engine. It uses a Side View, ATB battle system, and is much more versatile than its counterparts, RPG Makers 2000/XP/VX. I chose it because I felt like I could make a new Chrono game with a slightly different battle system, while still retaining the original feel. Sadly, dual techs were out of my range at that point in time, and still are right now. The most complex thing I did was the Party System, which I'm going to remake before the game's release hopefully. Other than that, it's fairly basic, but has much more exciting battles due to the hours of balancing and animating. I replicated a lot of Chrono Trigger's weapons, items, and techs. Trigger veterans should feel right at home as soon as they understand the small differences in the battle system.

RPG Maker takes some time to use, but it's not as complicated as coding a game. Beginners usually make a game slightly better, or equal, to the original Chrono Chronicles. Give them some time, and they can make some really awesome stuff.

5. Can you give us any info about this super secret bonus boss we've been hearing about?

Well, he's stronger than the final boss by a longshot. He's a tribute to something very dear to me, and I know the fans will have a blast fighting him! 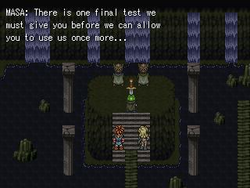 6. What are some of your non-Chrono game projects?

Well, I haven't completed any games other than the two Chrono games, but I've started several. Here's a small list:

I don't feel any of these are very good except for Zelda. It had some really neat puzzles.

7. Do you have any advice for beginners interested in trying their hand at game design via RPGMaker?

Learn the engine before you make a full game. Check various sites like RPGMaker.net and Charas-Project. They have a lot of tutorials, resources, and will host your projects if they pass the inspection. Don't worry if some people are overly critical. There are ALWAYS going to be some of those people. Enjoy it, and have fun with it! RPG Maker is a tool to express yourself, use it!

8. What's next for you now that Chrono Alter has been released?

After speaking with Zeality, I am going to fill in that last gap between Alter and Cross. I said I wasn't going to do this, but I feel it needs to be done. Chrono Alter is getting a sequel codenamed "Chrono Trigger III". Watch Kajar Labs for more info on CT3 a few weeks after Alter's release.

I would like to thank the Compendium staff and members for all the support you've shown Alter. I would like to thank Kholdstare and Chelsea for standing by me, and MrBekkler, Tssf, and Jaymonious for helping with testing, music, and animations. Thank you all so much, and I hope you enjoy Chrono Alter!

Lance has made some trivia about the game available! 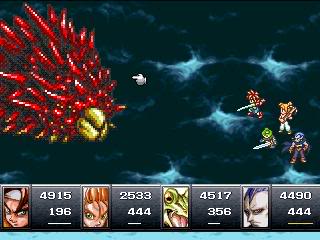