The Choras Inn, though initially a simple room of beds in the Middle Ages, was merged with the cafe of the same era to become a large business in present times. Like father, like son -- the second Carpenter frequents the establishment for alcohol, and redirects Crono to his wife's residence for Tools. 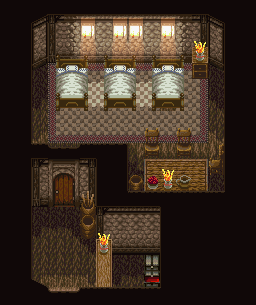