The Chief's Hut of Ioka is the most ornately decorated and spacious hut of all the dwellings, and is adorned with a pair of animal horns and tiger skins. Used by Ayla during her tenure as chief, she welcomed Crono and his party there and later let them rest inside after the battle with Magus hurled them to the prehistoric era. The tiger skins served well as beds. The hut was presumably abandoned when humanity went underground during the Ice Age. 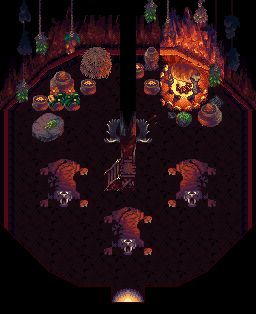