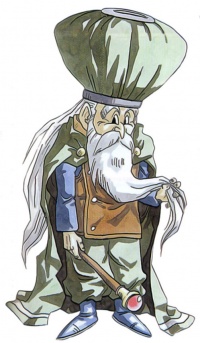 
The Chancellor of the Kingdom of Guardia is the King's right hand and probably officiates political and other non-military affairs in the area. Crono and his friends observed two Chancellors in their travels; both men were somewhat quirky, but generally good-natured and upbeat. Both Chancellors suffered from the plots of Yakra and Yakra XIII; in both the Middle Ages and Present, the Yakras captured the true Chancellors and masqueraded as them to influence Guardia. In 600 A.D., the fake official kidnapped Queen Leene and other soldiers of the kingdom in order to eat them and cause an uproar at the castle. Crono, Lucca, and Frog foiled his plan by assaulting his hideout at Manoria Cathedral and rescuing the real Chancellor and the queen. His release prompted a vow to create a criminal justice system in the kingdom.

The second Chancellor, residing in 1000 A.D., was detained in a treasure chest and impersonated by Yakra XIII. This figure seemed more malevolent than the first, mercilessly ordering Crono's execution and plotting the entire overthrow of the kingdom. He also staffed the castle dungeon with Mystics and attempted to kill Crono outright with the Dragon Tank. He lied to Marle about the death of Queen Aliza and her father's grievances, further straining their relationship. His final effort came when he accused the King of selling treasures of the kingdom; namely, the Rainbow Shell. Marle uncovered his true identity, and freed the real Chancellor. The true official soon began preparing for the Moonlight Parade, at which he presented Nadia's Bell.