A huge egg found in the Fossil Valley. What kind of egg it is remains yet unknown!

The Big Egg is found in Fossil Valley, on an outcropping below the skeleton of a huge Dragon. This dragon, Draggy's mother, apparently laid the egg before her death; it was cared for by the larger birds until Serge found it in 1020 A.D. He later was able to incubate it by using equipment in Fort Dragonia in Home World. Draggy, the last member of his race, hatched and joined the party. He later revisited his mother in Fossil Valley, who noted that she would always live on in his heart. 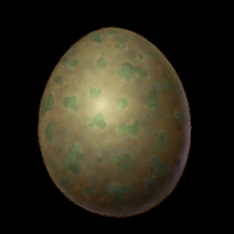