A mysterious flute handed down in the Beeba tribe. It allows you to tame the wildest of Wingapedes!

The Beeba Flute is a wooden instrument used to call the Wingapede for transport. Beeba use the flute in conjunction with the Ancient Fruit to ride the giant beast. Serge (if he decided to save Kid in Guldove) received one while foraying around the Hydra Marshes in Home World; when he first attempted to use it, the Wingapede attacked and sent him below to fight the Pentapus. Later, during the quest to collect the Dragon God relics, Serge successfully used the Beeba Flute to call a Wingapede and travel to Gaea's Navel. 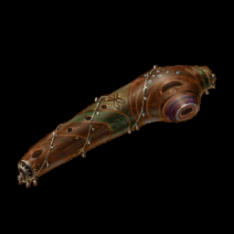